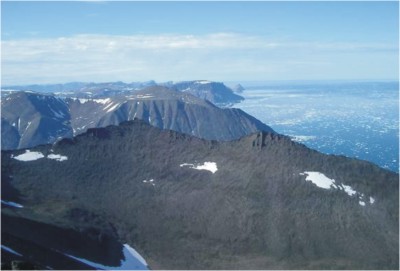 The rocks collected on Baffin Island were formed during a volcanic eruption 60 million years ago.

Recently geochemists studying Arctic rocks have discovered evidence of ancient rock from the Earth's interior, which, they claim, is as old as the Earth itself. Much of the material that made up the early Earth was lost and modified as the processes of melted mantle began firing up magma to form Earth's crust and plate tectonics then mixed that crust back into the mantle below. Team-leader Dr. Matthew Jackson, Geochemist, Boston University and his group of international researchers discovered this recently from the lava samples of Greenland and Baffin Island in the Canadian Arctic only suggest this astounding possibility. Beneath this particular environmental setting lies a region of the Earth's mantle that has largely escaped the billions of years of melting and geological shake-up that has affected the rest of the planet. It must be understood that the mantle is the layer of viscous, super-hot rock that stirs below the solid crust of the planet's surface. Naturally, when covered by 5-to-25-mile-thick crust, this mantle, which actually makes up four-fifths of Earth's volume, is difficult to get to and study. And even when samples of the mantle are found, they usually happen to be relatively young and recycled, emerging at the surface of Earth as molten volcanic material. But the rocks that Dr. Jackson & company discovered were spewed up to the surface of Earth by an eruption about 60 million years ago. Scientists believe that the newly discovered mantle "reservoir" as it is now called, dates from just few tens of millions years after the Earth was first assembled from the collisions of smaller bodies. It is also believed that this reservoir very likely houses the basic elements of compositions of the mantle shortly after the formation of the Earth's interior core. The same very elements that existed before the 4.5 billion-years' process of crust formation and recycling, modified the composition of most of the rest of the Earth's interior. According to co-author Dr. Richard Carlson of Carnegie Institution's dept. of Terrestrial Magnetism, "This was a key phase in the evolution of Earth. It set the stage for everything that came after".
The team of scientists examined a variety of isotopes to asses the exact age of the rocks. It must be mentioned here that elements can occur in various forms which are known as isotopes and over-time ratios of these isotopes gradually change and this allows the researcher to estimate the rock's age. Studies of helium isotopes have shown that rocks have anomalously high ratios of helium-3 to helium-4. This helium-3 is generally extremely rare within the Earth whereas helium-4 is constantly replenished within the Earth by the decay of radioactive uranium and thorium. This high proportion of helium-3 strongly suggests that the lavas in Baffin Island must have come from a reservoir in the mantle that had never previously out-gassed its original helium-3. And this also strongly implies to the scientists that neither had it been subjected to the extensive chemical differentiation experienced by most of the mantle. Also by analyzing the lead isotopes in the lava samples, the researchers were able to date the rocks to between 4.55 and 4.45 billion years, slightly younger than the Earth, herself!
Researchers are hoping that this significant finding will offer a more detailed insight into Earth's early geo-chemical evolution, all the dynamics that are at play in the Earth's interior as well as even suggesting the possibility that this finding could even challenge the existing theories regarding the formation of Earth.

The contributor is a freelance science writer.