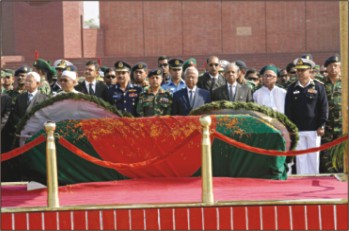 President Iajuddin Ahmed and Chief Adviser Fakhruddin Ahmed along with other VIPs pay respect to Birshreshtha Hamidur Rahman at the National Parade Square yesterday before the burial of the war hero's remains at the Martyred Intellectuals' Graveyard in Mirpur.Photo: STAR

Birshreshtha Hamidur Rahman was finally laid to eternal rest in his homeland yesterday with the highest state honours, 36 years after he embraced martyrdom during a battle with Pakistan occupation forces.
Before the burial, the nation paid homage to the Liberation War hero as the coffin with his remains reached the National Parade Square in the capital in the morning.
His coffin was brought back to his beloved motherland from Tripura in India on Monday.
Later, Hamidur was reburied beside Birshreshtha Matiur Rahman at the reserved graveyard for eminent freedom fighters at Mirpur Martyred Intellectual's Graveyard.
The 17-year-old freedom fighter attacked and destroyed two Pakistani military posts in a frontier area of Sylhet before falling in a hail of bullets on October 28, 1971.
His fellow freedom fighters buried him at Hatimarachara village of Tripura.
On behalf of the nation, President Iajuddin Ahmed, also the supreme commander of the armed forces, formally received Hamidur's coffin and placed floral wreath over it after the motorcade carrying it from Comilla reached the National Parade Square amid 21 gun salutes at around 10:40am.
Chief Adviser Fakhruddin Ahmed placed floral wreaths on the coffin draped in the national flag as part of the state ceremony.
A munajat was offered seeking divine blessings for the departed soul. A brief life sketch of the war hero was read out before the prayers, recalling his life and valiant fight during the Liberation War in 1971.
Earlier, six army personnel carried the coffin on their shoulders from the vehicle and put it on a podium set at the National Parade Square. Military bugle played the last post as the president, the chief adviser and other dignitaries and people of various professions stood in solemn silence.
The speaker, advisers to the caretaker government, chiefs of the three services, family members of Birshreshtha Hamidur Rahman and other Birshreshthas, political leaders, freedom fighters, senior civil and military officials, diplomats, distinguished personalities
and members of the armed forces were among others present to pay homage to the valiant freedom fighter.
On behalf of the family members of seven Birshreshthas, mother of Birshreshtha Abdur Rouf placed wreath on Hamidur's coffin.
The speaker, the deputy speaker and political leaders, among others, also placed wreaths.
Hamidur's three brothers and two sisters burst into tears during the ceremony.
"We are glad as my brother's body has been brought back home. It would have been better if the body was brought back when our mother was alive," Hamidur's youngest sister Rizia Khatun told The Daily Star. Hamidur's mother passed away in 2005.
Rizia said that though her brother made the supreme sacrifice for the country's independence, no significant development has been made in his village home where the villagers face sufferings due to lack of roads and other facilities.
She requested the government to announce the college named after Hamidur a government college and take steps so that Hamidur's relatives can obtain government jobs and financial help.
After the ceremony at the National Parade Square, Hamidur's coffin started the last ride for the graveyard in a motorcade.
His remains were reburied with the highest state honours and proper military honours with another gun salute when the coffin was being lowered to the grave.
On Sunday, the remains of the war hero, exhumed from his first grave in Tripura, were handed over to a Bangladesh delegation. After an overnight halt in Comilla Cantonment, Hamidur's coffin finally reached Dhaka yesterday morning.
A motorcade carrying the coffin started its journey from Comilla Cantonment at 6:05am.
Thousands of people lined the streets as the motorcade carrying the Birshreshtha's coffin, draped in the national flag, passed by.
The liberation war affairs secretary and armed forces division officials received the coffin in Dhaka.
As the 33 Infantry Division soldiers carried the coffin into the city, thousands of people crowded the highway to pay their respects to the war hero.
Hamidur is the youngest of the seven war heroes posthumously conferred Bangladesh's highest gallantry award for their role in the country's Liberation War. He was born at Khorda Khalishpur in Moheshpur upazila of Jessore on February 2, 1953.
Communist Party of Bangladesh and Bangladesh Chhatra Union placed wreaths to the grave of Hamidur, says a press release.