Most US students think Beethoven is a dog 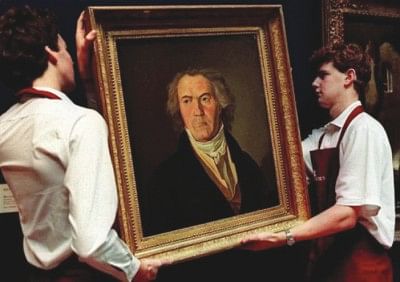 Most young Americans entering university in 2010 think Beethoven is a film star dog, according to the annual list.

Most young Americans entering university this year can't write in cursive, think email is too slow, that Beethoven's a dog and Michelangelo a computer virus, according to an annual list compiled by two academics at a US college.
To students who will get their bachelor's degrees in 2014, Czechoslovakia has never existed, Fergie is a pop singer, not a duchess and Clint Eastwood is a sensitive movie director, not Dirty Harry, Beloit College's “Mindset” list says.
The Mindset list was first compiled in 1998, for the class of 2002, by Beloit humanities professor Tom McBride and former public affairs director Ron Nief.
It was intended as a reminder to faculty at the university that references quickly become dated, but quickly evolved to become a hugely popular annual list that gives a snapshot of how things have changed, and chronicles key cultural and political events that have shaped a generation.
In the first Mindset list, McBride and Nief found that youngsters born in 1980 had ever known only one pope -- Polish-born John Paul II, who was elected to the papacy in 1978 and died in 2008.
Nief and McBride take a year to put the list together, gathering outside contributions and poring over journals, literary works, and the popular media from the year of the incoming university students' birth.
“Then we present the ideas to every 18-year-old whose attention we can get and we wait for the 'mindset moment' -- the blank stare that comes back at you that makes you realise they have no idea what you're talking about,” Nief told AFP.
Those moments make it onto the list, alongside interesting historical snippets.
The class of 2004, for instance, “never referred to Russia and China as 'the Reds'.”
Apartheid never existed in South Africa for the class of 2006, and for the class of 2007, “Banana Republic has always been a store, not a puppet government.”
The list is a mirror of how rapidly perceptions can change: to the class of 2013, boxer Mike Tyson was “always a felon” but to students who graduated five years earlier, Tyson was “always a contender.”
The list makes some people feel old, like those who remember what Michael Jackson looked like when he was singing in the Jackson Five or recall the days when there were only a handful of channels on television.
Few students in the class of 2009 knew how to tie a tie and most thought Iran and Iraq had never been at war with each other.
And for US students who got their bachelor's degrees this year, Germany was never divided, professional athletes have always competed in the Olympics, and there have always been reality shows.