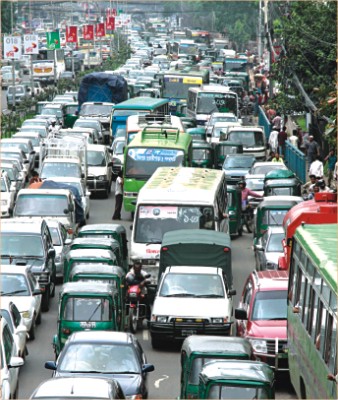 With the capital crippled by gridlocks on the first day of Ramadan, the government at short notice yesterday closed all schools and colleges for over a month from tomorrow.
Being unable to control the traffic chaos yesterday, the police department now believes this move would be an easy way out of the horrendous traffic situation ahead of Eid.
Authorities of educational institutions, however, were nonplussed. They could not formally announce the vacation to their students or give them holiday homework or guidelines since it is the weekend today and there will be no schooldays before the holiday ends. They came to know about the decision from the media yesterday.
Education Minister Nurul Islam Nahid said educational institutions get this holiday every year but they brought the starting date nearer considering the students, teaches and parents who fast.
"Traffic congestion is also a reason. But closing educational institutions nationwide is not the only solution for easing traffic congestion and we made the decision not only for this reason," he claimed.
The home ministry sent a proposal on Wednesday requesting to close the educational institutions from the 10th of Ramadan and as per the ministry's calendar the educational institutions were supposed to be closed on 12th Ramadan, he said.
"We will only lose five to six working days for the early vacation, but we can make that up after the vacation."
He said the schools and colleges would be able to finish their ongoing tests during the vacation. The schools and colleges open on September 16. However, madrasas will open on September 20.
Dhaka Metropolitan Police Deputy Commissioner (traffic-east) AKM Awlad Hossain told The Daily Star that office and school times start and end pretty much together which deteriorates the traffic situation. He said he believes with schools and colleges closed the traffic situation would improve.
He said the DMP last week asked the home ministry to close the schools from the 10th of Ramadan but the government closed them from the third.
The home ministry on Wednesday had suggested that all educational institutions in the capital be closed from the 10th of Ramadan to help reduce traffic congestion.
Huge tailback was seen in the city's Shahbagh, Farmgate, Karwan Bazar, Mohakhali, Malibagh, Gulistan, Moghbazar, Mirpur, Bijoy Sarani, Shyamoli, Khilkhet, Uttara and Airport to Abdullahpur areas.
The congestion took a turn for worse between 4:00pm and 6:00pm when people were rushing home from work. People were also seen in long queues to catch buses. The huge tailback started to ease a bit just before Iftar around 6:30pm.
Around 20 people were seen fighting at Shahbagh intersection trying to get into a BRTC bus heading for Mirpur, which already had people inside packed like sardines. Similar pictures were also seen at Farmgate, Mohakhali and other major streets in the city.
A passenger of a three-wheeler said, "I hired the CNG [three-wheeler running on CNG] from UN Road in Baridhara and it took more than two hours to get to Karwan Bazaar."
The suffering of city dwellers doubled with intermittent downpour throughout the day that created waterlogging in several city streets. The educational institutions and business institutions were open and many were seen heading towards shopping arcades.
Most of the school authorities said the government did not discuss with them before making the decision. They said they came to know through newspapers that institutions might close from the 10th of Ramadan.
Shahan Ara, principal of Motijheel Ideal School and College, said, "The government can decide about holidays and we will follow it but if it had made the decision a little earlier we at least could give some advice to students regarding their studies at home during the long vacation."
It is a longstanding practice in the country that schools give some homework and guidelines to the students ahead of long vacations. But this time when the education ministry announced the vacation most of the city schools and colleges were caught off guard. They were not officially informed and the schools and colleges could not even issue holiday notices to their students.
"The students of the morning shift left for home when we came to know about the decision from our day-shift teachers who got the news from the media. So we did not say anything to our day shift students since we did not have the chance to let the morning-shift students know about the vacation," Shahan Ara told The Daily Star yesterday.
She said they had a plan to close their institution on August 25 as per their academic calendar but they had to close it instantly to follow government's decision.
"We have to shift our schedule," said GM Nizamuddin, principal of Oxford International School.
The new session began from August 1 and the school was supposed to close on September 7 for Ramadan and Eid vacation, he said, adding, "We could have chalked out our plan for this year had the government made the decision earlier."
There seems to be a lack of coordination between the ministry of education and the ministry of primary and mass education regarding when schools will go on vacation.
The education ministry yesterday around 11.30am announced the vacation for schools and colleges but the primary and mass education ministry was not informed the decision.
Around 80,000 government and non-government primary schools are under the primary and mass education ministry.
Learning about the education ministry's decision, the officials at primary and mass education ministry sat in a hurriedly called meeting and decided to close the government, registered non-government and community primary schools from August 16 until September 16.
They told newsmen about their decision in a press conference around 1:30pm yesterday.