In memory of Tajuddin Ahmed 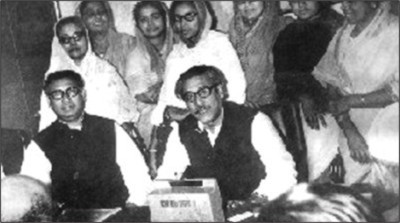 THE first prime minister of free Bangladesh" -- a phrase, associated with great honour and dignity. Yes, Mr.Tajuddin Ahmed, who happened to be the first prime minister of free Bangladesh rightly deserved the honour and dignity as stated above. He was a leader of great ability and farsightedness.
Mr. Tajuddin Ahmed was born on July 23, 1925 in the village of Dardaria near Kapashia. He had a religious upbringing as his parents were conservative Muslims. His talent was noticed in the early days of his school life. His admission to Saint Gregory High was an important step in his life. In 1944, he secured the 12th position in the matriculation examination. In 1948, he got the 4th position in the Higher Secondary Certificate Exam. He obtained B.A. (Hons.) in Economics from Dhaka University.
Tajuddin was involved in politics and social welfare activities from his school life. In 1954, as a candidate of Jukta Front, he defeated the then general secretary of Muslim League by a big margin. While in jail, Tajuddin took part in the law exam and achieved B.A. degree in law.
The deaths of so many people during the disastrous famine in 1350 (Bangla year) moved him very much, and he established a grain store to help the villagers in case of food shortage.
Tajuddin Ahmed was actively associated with the politics for the emancipation of our people. In 1943, he became a member of the progressive Muslim League. The East Pakistan Student's League was formed on January 4, 1948. As a founder member, he shouldered very vital responsibilities.
Between 1953 and 1957, he was the general secretary of Dhaka District Awami League. In 1955, Tajuddin was the social welfare and cultural secretary. In 1964, he played a very important role in reviving and bolstering Awami League, and in the same year he added new blood to the party by becoming the organising secretary.
Tajuddin joined the Lahore Conference of the opposition parties with Sheikh Mujibur Rahman in 1966, and declared the six-point demand in that gathering. He was one of Sheikh Mujib's close associates in the preparing historical six-points. He was arrested on May 8, 1966 for propagating the six-points. He was released on February 12, 1969. In the general election of 1970, Tajuddin was elected a member of the Pakistan National Assembly.
The Pakistani government refused to accept the people's verdict, and conspired with the the army to destroy what the people of the then East Pakistan achieved through the election. In 1971, General Yahya abruptly declared suspension of the general assembly meeting. Immediately, the non-cooperation movement started under the leadership of Sheikh Mujibur Rahman.
During this struggle, Tajuddin Ahmed demonstrated his uncanny skill in organising and carrying forward the movement against the Pakistani tyrants. He extended extremely valuable assistance when Sheikh Mujib met the generals to bring home the demands of the people of this part of Pakistan.
On March 25, 1971, Pakistani defence forces indulged in systematic killing of our people. They arrested our great leader, Sheikh Mujib, and took him prisoner in Pakistan. The Bengalis started an armed struggle and, in the absence of Bangabandhu, Tajuddin took over the responsibility.
On the historic April 10, 1971, Tajuddin was unanimously elected the prime minister. April 17 of the same year witnessed the official oath-taking of the government in Mujibnagar. The office of the prime minister was established on No. 8 Theatre Road in Calcutta. He devoted all his mind and energy to the service of the government.
He was a man of strong principles. He was never an opportunist, and was never ready to accept anything less than complete freedom of Bangladesh. As the prime minister, he had to take some harsh decisions for the benefit of Bangladesh, and even in those decisions he showed remarkable wisdom.
Prime Minister Tajuddin Ahmed possessed the rare quality of being neutral and precise in evaluating a situation. He could rise above personal emotion and put the right person in the right place at the appropriate time. He divided Bangladesh into eleven political zones. The zonal administrators were very carefully selected, and they were particularly instructed to make sure that no breach showed up among the freedom fighters. His fair dealing won their respect.
Tajuddin thought that the votes of the Indian Urdu speaking Muslims were vital for the Congress, and if they misunderstood the real situation which forced the Bangladeshis to take arms against the Pakistani army they might be a headache for the Congress Party, which was in power then.
He advised Advocate Mohammad Nurul Quader to meet the influential Muslim leaders and editors of Urdu newspapers for a threadbare discussion about the cause of our struggle. It was a very important diplomatic move, which had to be made in total secrecy. Tajuddin's wise guidance finally made it a success.
Mr. Tajuddin continued to be the PM until Sheikh Mujb returned to Bangladesh on January 10, 1972. He took the charge of the ministry of finance and planning. He resigned on October 26, 1974. And then, in the dark night of August 15, 1975, Sheikh Mujib was assassinated along with his family. Tajuddin was put under house-arrest and later sent to the Dhaka Central Jail, where he was brutally murdered with three other leaders of the Mujibnagar government.
Tajuddin, the first prime minister of Bangladesh, will remain alive in our hearts for ever. The killers, the supporters and the beneficiaries are all guilty of homicide. Divine justice is there. It will follow its own course. The perpetrators will have to pay for their inhuman crime-sooner or later.