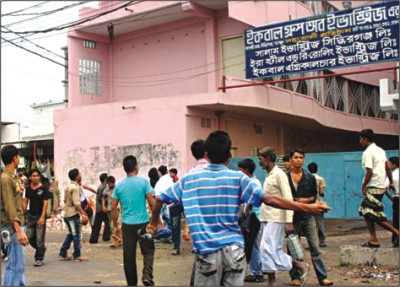 The European Union has expressed concern over the frequent unrest in Bangladesh's apparel industry as garment workers continued their agitation yesterday vandalising several factories and vehicles in Ashulia and Narayanganj.
The violence yesterday resulted in the temporary production halt at 26 factories.
A three-member delegation led by the EU Ambassador Stefan Frowein met Labour Minister Khandker Mosharraf Hossain at his Secretariat office yesterday and informed him about their concern.
They told the minister that the EU and their citizens, who are consumers of the Bangladeshi garment products, are very worried over the state of the sector.
The delegation called upon the government to intervene quickly to restore a peaceful atmosphere, Mosharraf later told reporters quoting the EU representatives.
He said he told the delegates that the workers were pressing for a raise in their pay and the government was taking every step possible to end the crisis.
Meanwhile, police and locals said around 1,500 workers of Magpie Sweater Ltd at Ghoshbag in Ashulia started demonstrations in and around the factory around 8:00am after they saw a notice about the factory shutting down.
They had been agitating for pay hike for the last three days.
Police said the workers started vandalism pelting brickbats at the factory and neighbouring factories and also tried to put barricade on Bishmile-Jirabo Road.
Police foiled their attempt.
Panic gripped the area forcing authorities of at least 25 factories to close their units for some hours around 10:00am.
Ashulia Police Station Officer-in-Charge Sirajul Islam said they foiled the attempt of unruly workers to make the situation worse and claimed that production in most of those closed factories resumed after lunch.
Police and locals said Mascot Group, Irish Fashion, ARB Knitting, Radiance Knitwear, JL Sweaters, Lusaka Group, Arunima Sports Wear Ltd, Active Composite Ltd, Southern Group, Bengal Plastic, Design Tex Ltd, Leatherex Ltd, Continental Garments Industries Ltd, Horizon Fashions Ltd, Z DG Industries Ltd were among the ones that shut down production.
Bangladesh Garment Manufacturers and Exporters Association (BGMEA) President Abdus Salam Murshedy said the factory owners were forced to suspend production in their factories due to insecurities.
Meanwhile, agitating workers of Haylen Sweater factory yesterday set up barricades on Narayanganj-Adamjee-Demra Road and vandalised vehicles.
They were protesting the closure of their factory in Adamjee EPZ.
Officer-in-Charge Badrul Alam of Siddhirganj Police Station said the workers had been demonstrating for the last few days demanding pay hike.
On Sunday, they attacked the officers of the factory and vandalised the factory and injured 10 people. On that evening the owners and the workers had a meeting that produced zero results.
Yesterday morning the workers were not allowed to enter the factory and the owners closed it down without notice.
The workers became infuriated at this and set up barricades halting traffic for an hour and vandalised 12-15 vehicles.