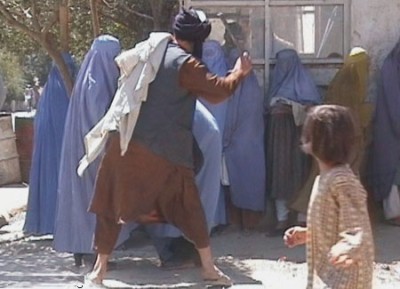 Taliban man beats a woman for not covering herself properly. Islam-watch.org

ONE by one the Europeans are closing on the veil -- the all-covering dress that increasing number of Muslim women are donning around the globe. Irene Khan (DS, May 12) objected to the Belgium government's action that prohibits wearing of the veil (nikab) in public places.
The ban was imposed due to security reasons -- identification is almost impossible when someone is wearing a nikab. Irene Khan dismissed the security concern by saying "neither suicide bombers nor burglars have taken to wearing the nikab." She argues that if nikab is banned on security grounds then we need to ban "motorcycle helmets, balaclava caps, hooded jackets and outsize sunglasses."
I disagree with her contention that nikab does not present a security threat. Indeed, I would argue that it is a security concern not only in Europe, but also across the world. To compare nikab with "motorcycle helmets, balaclava caps, hooded jackets and outsize sunglasses" is, I would contend, an attempt to downplay a very serious global security issue.
As the threat of terrorist attack looms larger, security measures are getting tighter everywhere. Indeed, identification of people wearing "motorcycle helmets, balaclava caps, hooded jackets and outsize sunglasses" is difficult, but the difficulties multiply many times with nikab.
The burqa has come into focus because of large number of terrorist attacks carried out by burqa-clad females. Chechen guerillas fighting against the Russians used burqa-clad females in their attacks on a Moscow theatre (October 2002) and the school in Beslan, North Ossetia, Russia (September 2003). On March 29, two Chechen women suicide bombers struck at Moscow's underground metro system.
The Palestinians used females, dressed in the traditional Arab garb, to attack Israeli public places. In Pakistan, Afghanistan, Iraq and Jordan, burqa-clad female suicide bombers had caused enormous mayhem over the last few years. In fact, female suicide bombers were more successful in reaching their intended targets compared to their male counterparts.
The reasons for choosing burqa-wearing females are obvious. Firstly, a female is more likely to pass through security checks with ease, and secondly, it is easier to hide explosive packs inside a burqa. Even male terrorists sometimes wear burqa to evade security checks. In the Lal Masjid siege in Islamabad in July 2007, Maulana Aziz Ghazi, one of the leaders of the group holed up in the mosque, tried to escape the police cordon wearing a burqa.
Instead of fighting for the rights of European Muslim women to wear the veil, people like Irene Khan need to build up public opinion in the Islamic world against sending Muslim women to their deaths as suicide bombers. Ms. Khan says that wearing a burqa is a basic right of Muslim women. The photograph accompanying her article emphasises this point too.
Islam, like other religions, prescribes a modest dress for both men and women. However, what constitutes modest dress has been a matter of controversy throughout the Islamic world. Our mothers and aunts attended religious duties in saris and felt perfectly comfortable in that. It all changed only over the last two decades.
The traditional female attire in the Gulf Arab states is now being prescribed as the standard dress for the Muslim women worldwide. Along with the rising financial and political clout of the Gulf states, we are witnessing a religio-cultural invasion. Along with many ideological inputs, including militancy and extremism, came the hijab and then the burqa.
Historically, the veil has been an elitist dress all across the medieval world; a sign that its wearer does not have to do physical labour. Thus, we see the veil in the Roman courts in Europe and in the princely Rajput clans in India. A Bedouin woman in Arabia or a farmer's wife in Bangladesh cannot wear burqa while tending camels, fetching water or milking cows.
The fact is that the veil was an innovation of the Umayyad when they set up their court in Damascus. To claim that wearing a burqa is a basic human right of all Muslim women is a distortion of history.
In fact, Muslim women in Europe or America are enjoying far greater human rights than their sisters in the Islamic world. If basic human rights means right to life, property, education, healthcare, freedom of choice, social and physical security, etc the Muslim women in the West are far better off.
In the early part of the last century, Begum Rokeya Sakhawat Hossain emancipated the Bengali Muslim women, took them out of the darkness of ignorance to the enlightenment of knowledge, broke the shackles of purdah and brought them out under the sun, much to the consternation of the religious leaders at the time. Since then, Bengali Muslim women have come a long way in all walks of life.
There were others, like Kemal Ataturk in Turkey or Gamal Abdel Nasser in Egypt, who brought revolutionary changes in how the Muslim community looked at women. Now, however, there is a threat from the religious right who are trying to put the shackles back on them. The destruction of girls' schools in Afghanistan and Pakistan by the Talibans are part of the campaign to keep women illiterate and inside four walls.
It is, therefore, of utmost importance that our opinion makers and those who are at the helm of affairs take positive steps to check the infiltration of extremism and obscurantism into Muslim society and allow the Muslim women to take a more active part in building a modern, progressive society in the 21st century. People like Irene Khan could be role models for the Muslim women. It is important that they choose their roles carefully.

Air Cdre (Retd) Ishfaq Ilahi Choudhury is a Security Analyst and Registrar, BRAC University. This has been written in the writer's personal capacity.