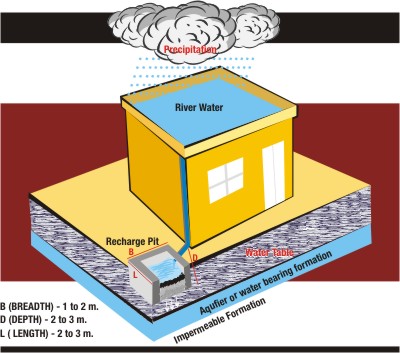 After over two decades of groundwater level decline, Dhaka Wasa will at last start recharging the aquifers of the capital this monsoon, to save the city from a looming scarcity of supply water, and subsidence of the ground surface.
Dhaka Water Supply and Sewerage Authority (Wasa) started a pilot project titled "Artificial Recharge from Rainwater" around five months back at two places of the city, said a high official of the government agency.
"Under the taka one crore pilot project, rainwater will be harvested at Wasa office compounds in Lalmatia and Segunbagicha, then the water will be filtered and sent to aquifers through two wells," said Wasa Deputy Managing Director (Operation and Maintenance) Liakat Ali.
The infrastructural work including construction of the wells, and rainwater harvesting reservoirs is expected to be completed next month, said the other official.
According to a 2006 assessment study by the Institute of Water Modelling (IWM), commissioned by Wasa, the groundwater level at different parts of the capital has been dropping by two to three metres a year, Liakat said.
The reason for the decline is excessive use of the groundwater through deep tube wells; and filling up of low lands, canals, and other water bodies, said experts.
Unplanned dumping of sewage, and household and industrial wastes, in the city rivers and other water bodies, makes it difficult for Wasa to use surface water, resulting in its dependency on groundwater, said Selim Bhuiyan, a Bangladesh Water Development Board engineer.
Prof Mujibur Rahman of Bangladesh University of Engineering and Technology (Buet) said the city will face a huge water crisis in the near future if Wasa continues lifting groundwater through the huge number of its deep tube wells.
The practice, if goes on unabated, might lead to disasters like subsidence of the ground surface, said Selim Bhuiyan.
Around 80 percent water of unconfined aquifers, which are the closest to the ground surface, is used up, said Md Eftekharul Alam, an engineer of Bangladesh Agricultural Development Corporation.
Dhaka Wasa has already been forced to lift water from the deeper confined aquifer at 90 points of the city including Mirpur, Nakhalpara, Ibrahimpur and Manipur, said a former chief engineer of the agency, Md Nurul Haque.
According to a Wasa statistics, currently the source of 87 percent of supply water in the capital is groundwater through 551 deep tube wells. The remaining 13 percent comes from surface water through 4 water treatment plants at Sayedbad and Chandnighat in Dhaka City; and at Godnail and Sonakanda in Naraynaganj.
Md Nurul Haque said there are also around 1,200 authorised private deep tube wells in the city, which are extracting groundwater as well, on top of which there are almost 2,000 illegal ones.
To save Dhaka from an impending disaster, the experts suggested stopping pollution of the rivers in and around the city, and reclaiming other water bodies as well, along with recharging the aquifers.
Use of effluent treatment plants in industries, and setting up waste treatment plants to treat human excreta, are a must for preserving surface water sources, said Prof Mujib of Buet.
The contract for the aquifer recharging project was awarded to IWM in December 8, 2009 by Wasa. The institute is supposed to submit its report in March next year, said the Wasa high official.
"It is not a new technique, it has been in use all over the world. If we get a positive result from the pilot project, we will start implementing it on a much larger scale in the city next year," said Wasa DMD Liakat, adding, private compounds of high rises can also be brought under the programme then.
Wasa already made a plan to reduce its dependency on groundwater, he said. When Sayedabad Water Treatment Plant Phase-II will be completed, surface water's share at the city's taps will rise to 23 percent, he added saying, the plant is scheduled to be ready for operation in two and a half years.
Wasa also took an initiative to set up two more water treatment plants in Khilkhet and Keraniganj of the city with capacities of treating 50 crore litres and 45 crore litres respectively per day, he said, "We are hoping that the two treatment plants will be operational within the next five years, curbing our dependency on groundwater to fifty percent."
Dhaka Wasa has the capacity of supplying around 200 crore litres per day while the demand is for 220 crore litres.
According to a statistics of Bangladesh Water Development Board, groundwater level in Mirpur dropped 53.75 metres between 1991 and 2008, while the decline was 18.59 metres in Mohammadpur, 37.4 metres in Sabujbagh, 8.22 metres in Sutrapur, and 14.14 metres in Dhaka Cantonment during the same period.