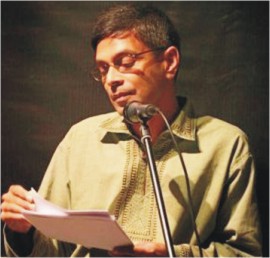 He came in quietly, a man slight of frame and bespectacled. Some of the other participants among whom were academics, independent writers, editors of local English dailies, members of local reading groups were talking about potential points of discussion in a corner. Some were nervous about what they could say about a book before its author.
As part of the Department of English and Humanities (DEH), I was thrilled that our department would host 'An Evening with an Author', a reading and discussion of Killing the Water with Mahmud Rahman. A new collection of short stories published by Penguin India, Killing the Water, had garnered widespread positive reviews, and even caused an admiring Indian eye to momentarily turn to Bangladeshi storytellers writing in English.
It was almost a coup, the fact that we managed to make the evening happen at all. Rahman had launched the book just a week earlier at Omni and would be flying back to the US in a couple of days. But the man made it much easier than I thought it would have been. When I first approached Mahmud Rahman, Mahmudh bhai as I have gotten used to calling him, about doing a reading and discussion of Killing the Water at ULAB, his reply was an open and soft-spoken, "Just let me know and I will try to be free then."
The setting for it could not have been better. It was late afternoon on a Thursday. We were going host it in ULAB's campus B seminar room, a glass-walled suite on the roof of the building, high above the congestion of the Dhaka streets that choke out all things humane and civil. Rows of potted plants sprawled across the building's rooftop garden, some large and majestic, curtain the outsides of the clear glass walls.
I had first met the writer a year earlier. But I had heard about him much earlier. When people told me about him they would say that he was the man coming out with a collection of short stories through Penguin India. People in Bangladesh writing in English mentioned that he was a great writer, someone who would do something special. The buzz around his name was like the unspoken wish around the candles of a child's birthday cake.
Even though I already knew him, I had always been apprehensive about asking him about his book before that evening. The timing never seemed right. I never felt it proper to ask him about the stories in the book, assumed that it would be too intrusive. But at ULAB I felt that I had been foolish for ever thinking that Rahman would be reluctant to talk about his book, that he would too sensitive about it. He was completely open to any topic raised by the participants and spoke at length about everything we wanted to discuss.
Mahmud Rahman opened with a reading of an excerpt from 'Kerosene', an allegorical story based on communal violence and atrocities. He explained that he wrote 'Kerosene' after reading Coetzee's Waiting for the Barbarians. After reading that novel, which allegorizes apartheid South Africa, he decided that his story about communal violence would work better if it were fashioned similar to Coetzee's prize-winning novel. He added that people around him both his friends and the editors of the book had wanted him to make the story more literal and asked him to set 'Kerosene' in Bangladesh. But he was adamant about sticking to an allegorical style because he thought it would be best for the story. He also explained that he had got the names for the races in the story from real life: the name Demon was from the independence war posters that decried the Pakistanis and Running Dogs was the coinage used by Asian communist parties for Western-backed Asian governments in the seventies.
The author also spoke about the process that went into the stories in Killing the Water. During the conversations that followed, he said that he had to fight against the generalizations of his editors a lot of the time. But despite all the difficulties faced in working with the editors, he said he had benefitted tremendously from their feedback and comments. To him, the main task of writing, the point where the stories became real, was the process of rewriting and so editors were crucial. He said that he was very happy that he had a good editorial team in Killing the Water. It gave him a lot of great suggestions, many of which he found invaluable during the rewriting process.
As we talked about all these literary points we forgot completely about the time. We tried to keep the evening going none of us wanted to stop. When we all finally got up and it came to an end, many of us straggled around in the rooftop garden, sipping tea and munching on our complimentary shingaras, reflecting on the evening and feeling that we had learned a lot from the author and the man, who I felt was as humane and interesting as the voice that runs through the stories in his book.

Shakil Rabbi is Lecturer, Department of English and Humanities, ULAB.