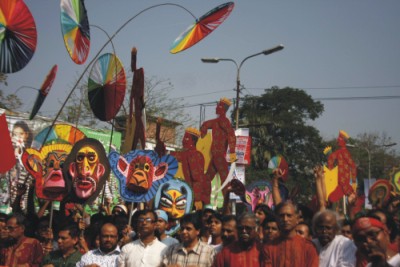 Pohela Boishakh has long been contested political ground. For most Bangladeshis it is a cherished article of authentic indigenous Bengali culture. But not for the fundamentalists, who have long made it a target, both rhetorically and in more direct and deadly ways.
I have always felt that this hostility to Bengali culture, which to them has the taint of our pre-Islamic heritage, has long been the principal stumbling block for the fundamentalists in their struggle to win the hearts and minds of ordinary Bangladeshis.
But the fundamentalists make no bones about their opposition to Pohela Boishakh. They make no bones about their hatred of the new year's celebrations at Ramna Batamul. This hatred and hostility was why militants bombed the celebrations in 2001, killing 10 and injuring scores.
But this hostility to Bengali culture is one significant reason why fundamentalism has never gained much traction among the general population.
In the long run, the fundamentalists face a similar problem with respect to religion. It is not that Bangladeshis are not religious people. In fact, religious faith is an important part of most Bangladeshis' identity.
But Bengali Islam, which was introduced to the region by Sufi missionaries, has long been a syncretic and liberal creed, that for many includes veneration of Sufi saints and their holy shrines.
The fundamentalists have declared war on all this (they bomb the shrines, too) in their attempt to impose a more rigid and conservative Wahhabi-infused doctrine on the nation.
Religion has always been a hot button issue in Bangladeshi politics. But here there are two things to note.
The first is that all political parties in the country recognise the centrality of faith in the Bangladeshi psyche. In other words, it is not as though there is no place for people of faith outside of the Islamist political parties.
The second point is that even among the Islamist political parties, there are those that are not hostile to our pre-Islamic and non-Islamic Bengali heritage and culture. In other words, there are many more options other than just the Jamaat-e-Islami.
This new year, the Jamaat finds itself in uncharted territory due to the government's determination to, at long last, pursue war crimes trials that will doubtless focus on many members of the Jamaat high command.
But the interesting thing is that this might in fact make the Jamaat a more popular party in the long run, once it has expunged itself of the taint of war crimes and collaboration in 1971.
In fact, many of the younger members of the party, most of whom were not even born in 1971, reportedly want the trials and are looking forward to a future when the party's role in 1971 is not a mill-stone around its neck.
Alas for these young idealists, that is not the only problem the Jamaat faces. As long as it continues to oppose Islam as it is traditionally practiced in Bangladesh and our indigenous Bengali culture, I suspect the party will continue to have a tough time attracting adherents.
But religion remains a live issue and the AL needs to address the perception that the party is hostile to the religious, that has long been the party's Achilles' heel.
To this end, the AL is attempting to re-frame the discussion. No longer is the argument that the AL is the party of secularism, per se, that, in many people's eyes, translates into being anti-religion.
The AL's new line of argument, insofar as the debate centres on religion, is to re-brand the party as the defender of Islam as it has traditionally been practiced in Bangladesh.
It feels that a more compelling line of attack against the Jamaat is to criticise them, not for being anti-secular or communal, per se, even though they are, but for promoting a non-indigenous practice of Islam which is alien to most Bangladeshis.
This means making a big deal of promoting the nation's Sufi heritage and articles of traditional Bengali culture such as Pohela Boishakh.
This is what was behind the renaming of the airport after the great Sufi saint Hazrat Shahjalal.
Naming it after this revered figure of Bengali Islam helps shore up the government's religious credentials. There is now talk that each one of the big airports in the country will be named after a different Sufi saint.
This helps to reframe the national debate over religion, not as religious versus secular but as indigenous versus alien. This is firm ground for the AL to contest from.
I don't know about the short run, but re-framing the debate on terms more advantageous to you is what wins political battles in the long run.