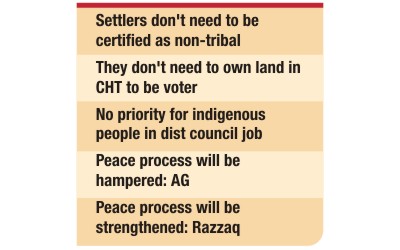 The existence of the Chittagong Hill Tracts Regional Council for over a decade is under threat as the High Court yesterday declared the CHT Regional Council Act 1998 illegal and unconstitutional.
The council has been functioning under the leadership of Jyotirindro Bodhipriya Larma, popularly known as Santu Larma, since its formation in 1999 under the act formulated as a result of the historic CHT Peace Accord 1997.
The HC bench of Justice Syed Refaat Ahmed and Justice Moyeenul Islam Chowdhury declared the act illegal following a writ petition filed in 2000.
It, however, rejected another writ petition filed in 2007 for declaring the CHT Peace Accord illegal too.
The court declined to interfere in the peace accord because some relevant provisions of it had already been merged with the "impugned legislation".
The CHT Regional Council was formed to coordinate among the district councils of Rangamati, Bandarban and Khagrachhari regarding development activities, resolving inconsistencies in their activities and maintaining law and order.
It has also the authority to coordinate the activities of NGOs and issue license for heavy industries.
The court started delivery of the judgment on Monday morning and completed it yesterday afternoon.
After the verdict, Attorney General Mahbubey Alam siad, "The High Court discharged the writ petition that challenged the CHT Peace Accord and its implementation. So, the peace accord is legal. The court declared one law and a few sections of other laws, which had been formulated in light of the peace accord, illegal."
He, however, said, "We will go to the Appellate Division of the Supreme Court as soon as possible to stay the High Court verdict."
Main counsel for the petitioner barrister Abdur Razzaq, in his instant reaction to the judgment, said, "From today [yesterday] the Chittagong Hill Tracts Regional Council is not effective anymore and it does not exist."
Razzaq, a top leader of Jamaat-e-Islami, said, "It is a good judgment. As a result of this judgment, the peace process [in CHT] will be further strengthened."
He said the CHT Regional Council would hamper the unitary character of the state, which is the basic feature of the constitution.
But Attorney General Mahbubey Alam expressed opposite views, saying the judgment would hamper the peace process and create complexities in the functions of CHT regional administration.
He said the peace process in CHT areas and the unitary form of the government would be damaged following the verdict.
The HC in its judgment also declared a few sections of the three amended CHT district council acts of 1998 illegal and unconstitutional following a prayer of a writ petition filed in 2000.
As per one of the sections Bangalee settlers have to obtain certificates declaring them non-indigenous from the circle chief (headman) of an indigenous community in the CHT.
Another section says no one who does not own land in the CHT can be a voter.
Other provisions of the same law give privileged rights to hill people in getting jobs at the hill district councils and the police force in those districts.
In one of the five guidelines of the judgment, the HC bench said it has found that the CHT Regional Council Act violated some articles of the constitution but it is still up to the government to form public statutory authority comprising entirely nominated members as part of the peace process.
The court said it is certainly an irony that the peace process, aimed at democratic governance, has not been able to ensure the practice of democracy in CHT. Democratic governance in the CHT is the lifeblood of the peace process and should be encouraged in all earnest, it said.
About the backward section of citizens in the hill tracts, the court said it is the government's responsibility to adopt a method and procedure, which are reasonable and convenient.
The court also said the peace process has to be pursued against the backdrop of geo-strategic consideration and the historical circumstances under which the conflict arose and was brought to an end in 1997.
THE WRIT PETITIONS
In 2000 and 2007, Bangalee settler M Badiuzzaman and pro-Jamaat lawyer Tajul Islam filed the two writ petitions.
The HC issued separate rules following the petitions, asking the government to explain why the CHT Peace Accord should not be declared illegal and the provisions of the related laws illegal and unconstitutional.
On December 2, 1997, the previous Awami League government led by Prime Minister Sheikh Hasina signed the CHT Peace Accord with Parbatya Chattagram Jana Sanghati Samity (PCJSS) leader Jyotirindra Bodhipriya Larma, ending an over two-decade-old insurgency.
Advocate TH Khan and barrister Rokan Uddin Mahmud placed submissions as amici curiae (friends of court) while Dr Kamal Hossain and barrister Sara Hossain argued for the PCJSS, one of the parties of this case besides the government.
Barrister Moudud Ahmed and barrister Abdur Razzaq moved for the petitioners while barrister Imran Siddiq, barrister Belayet Hossain and advocate Tajul Islam assisted them.
Additional Attorney General Murad Reza and Assistant Attorney General Protikar Chakma stood for the government.