Floating above the tides 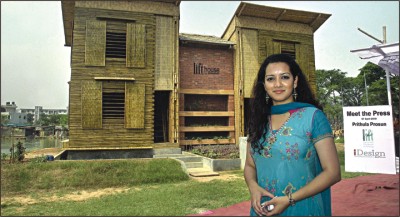 Prithula Prosun, an architect, poses in front of a Lift House designed by her. The house with its amphibian characteristics can be a lifesaver to many during floods. Rashed Shumon

Prithula Prosun was on edge when she was asked to submit a proposal for her master's thesis.
The housing problem of the poor in Bangladesh during floods came to mind and she settled for "floating houses" -- also known as amphibian houses -- as the subject of her thesis.
A floating house can elevate itself upwards with rising water levels due to floods and water logging and return to ground level as the water recedes.
After completing her studies in architecture from the University of Waterloo in Canada, Prosun came back home and built the first floating house in Bangladesh that was launched on January 26 and named it the 'Lift House'.
“I found many suffering from acute housing problems during floods,” Prosun says. “The house will solve their problems to a great extent.”
“That is why I elaborated the letters of the word 'Lift' as Low Income Flood Proof Technology.”
She formed an architecture firm, iDesign, here and the Lift House is their first and only project in Bangladesh.
The house built of bamboo and Ferro cement is capable of floating with rising water levels, she says.
The house's bamboo and bamboo goods built structure is attached to a fixed brick and concrete structure in the middle. The bamboo built portions can float.
“The ability to float was achieved by using around 8,500 plastic bottles (top closed) under the bamboo structure,” Prosun explains to The Daily Star.
The dwelling is attached to the service spine with a steel vertical guidance system that restricts horizontal movement and tipping while floating, Prosun said at a recent press meet at the Housing and Building Research Institute at Mirpur, Dhaka.
For electricity, two 60-watt solar panels are installed in the structure, she says. There is a reservoir inside the structure to collect rainwater to meet the domestic need for water, she adds.
The house has no sewerage system, although there is a toilet. “There is a composting toilet system. The toilet's urine will be drained out to the garden made in front of the house.”
“As human waste turns to fertiliser in about five years, we designed the house to store and use waste as fertiliser later in the garden.”
The house also has two high quality ovens attached on the second floor, she says.
A 400-square feet Lift House can cost around Tk 2.5 lakh on average, if eight to ten buildings in a community are built at a time.
“But the cost will drop to Tk 1.5 lakh to Tk 2 lakh if 100 homes are built at a time,” she says, adding that a person can own such a house by paying Tk 1,000 a month for 15 years.
A floating house is a new concept in Bangladesh, but not in other parts of the world. There are over 10,000 floating homes in Holland alone and the number is expected to grow to 20,000 by the year 2020.
The International Monetary Fund launched its first floating home in Europe on June 24, 1999.
Such homes are becoming popular day by day around the world. Hollywood actor Brad Pitt's Make it Right Foundation unveiled a floating house on October 6 last year. That house, designed by Morphosis Architects, can float up to 12 feet or 3.66 metres as water levels rise.
Prosun hopes it will also be a hit in Bangladesh soon. But her homes have some questions on durability. It might not stand still in a cyclone.
On the matter, she says it is their pilot project. “Our present project is designed only for Dhaka and its surrounding areas -- not for the cyclone prone localities.”
“We can build stronger houses for those areas. But that will depend on its demand.”
She hopes to receive proper responses from the government and private organisations, including banks, as they have no sponsor now, the young architect says.
They have plans to install a biogas plant in the house later to make it more environment-friendly.
shoyeb@thedailystar.net