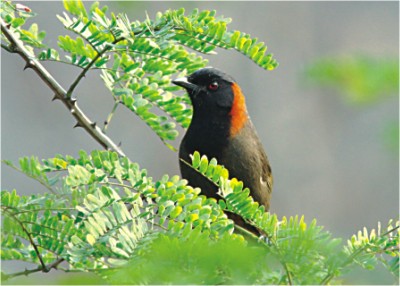 A small band of Rufous-necked Laughingthrush has thrilled birdwatchers in the Botanical Garden at Mirpur recently. The birds briefly emerged out of thorn bush and rattan at the extreme end of the garden. They are shy birds of the eastern edge of Bangladesh and not expected to be seen in a crowded garden in Dhaka.
Laughingthrushes are not thrushes, but big babblers living in flocks and feeding in the leaf litters of the forests. Bangladesh has only five species of Laughingthrushes occurring mostly in the hill-forests of Chittagong and Sylhet divisions. The Rufous-necked Laughingthrush is the only one that occasionally ventures near human habitation and seen in tea gardens and village groves.
Birdwatchers once saw Rufous-necked Laughingthrush in the Botanic Garden 12 years ago. That unlikely event was explained by them as a momentary stopover of the birds somehow displaced from their conventional habitat. After seeing the birds there a second time, they are now prepared to consider Botanic Garden a Rufous-necked Laughingthrush habitat -- its only home in entire Dhaka division. Comilla is the nearest place where this bird is usually seen.
To many noteworthy birds the Botanic Garden has been a green oasis in the sprawling concrete desert of the capital Dhaka. The list of birds seen here includes precious residents like Stork-billed Kingfisher, Plaintive Cuckoo, Brown Hawk Owl, Asian Paradise Flycatcher, Orange-headed Thrush, Pale-chinned Blue Flycatcher; and treasured migrants such as Black-capped Kingfisher, Chestnut-winged Cuckoo, Lesser Racket-tailed Drongo, Scaly Thrush, Siberian Rubythroat, Forest Wagtail, etc. The list is enriched now by the unexpected addition of the resident Rufous-necked Laughingthrush.
Botanic Garden is the only place in the capital worth a birdwatcher's visit. Every birdwatcher visiting Bangladesh takes at least one look at this garden. Former US President Jimmy Carter once visited it for bird watching. Yet the garden authority has done little to preserve or improve its bird habitats. Roses, cacti and ornamental plants more than the bird-friendly indigenous trees, creepers and bushes receive its care and attention. Preparing bouquet, garland and pot-plants for the bigwigs looms large on its agenda.
Our Botanic Garden was meant to be a place to study the diversity of plants and the pyramid of living creatures the vegetation supports. It should not deteriorate into a mere strolling park such as Ramna Garden, Suhrawardy Park or Chandrima Udyan.