A fertiliser of hope 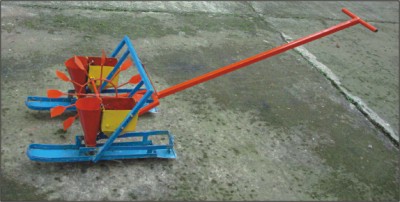 Yearly requirement of urea in Bangladesh is 2.9 million tons (mt) of which 80 per cent (2.3 mt) is used for rice alone. The country produces 1.7 mt and the rest is imported at a cost of 465 million US $. Urea is usually applied in prilled condition by hand. Its application efficiency is only 35 to 40 per cent. When it is applied in super granule form, its application efficiency is increased to 60 per cent. If all the urea could be applied in super granule form, then 1.15 mt urea could be saved. In that case only 0.05 mt urea needs to be imported.
When urea super granule (USG) is applied in the field, environmental pollution is reduced to a large extent. Many local fish species have been destroyed due to excess use of nitrogen fertilizer. When urea is applied to the field, it is absorbed in the water of the field and leached to the groundwater thereby polluting it and making it very difficult to treat. If urea is applied in super granule form, a huge amount of urea production could be reduced, which in turn would save a lot of natural gas. The saved natural gas could be used to generate electricity.
Usually USG is applied by hand, which is a very time consuming and laborious job. Yet many farmers in different parts of the country use this technology to get more yields with less fertilizer. Moreover, in this method, one top-dressing is required instead of two as required in prilled urea. International Fertilizer Development Corporation (IFDC) has been trying to popularize the USG technology in different countries for many years. They became successful to some extent. But due to lack of a good applicator, the technology could not be popularized to the desired level.
Recently, the scientists of Farm Machinery Division of Bangladesh Agricultural Research Institute have successfully developed a hand operated USG applicator. This is a two-row machine that applies USG at 6 to 7 cm depth below the soil surface in the middle of four bunches of rice seedlings. The applicator is made of locally available iron and plastic materials and can be manufactured in simple engineering workshops. When USG is applied by hand, 28 hours are required per hectare, whereas only 10 hours are required by the applicator. The cost of application is proportionally reduced. The biggest advantage of the applicator is the reduction of drudgery. The weight of the machine is only nine kg that makes it very easy to carry to the field. As its price is only Tk 3,500, farmers can get their money back within a season. Seventy farmers of twelve districts have purchased this machine within four months of its development. It is expected that, if proper publicity is made and the farm machinery manufacturers come forward in the production of quality machine, then the applicator will be popular among farmers very soon. In turn urea requirement and production cost will be reduced and rice production will be increased.
.................................................................................
The author is former Director General of Bangladesh Agricultural Research Institute and an agricultural engineer by profession.