Schoolgirl takes her life for teasing 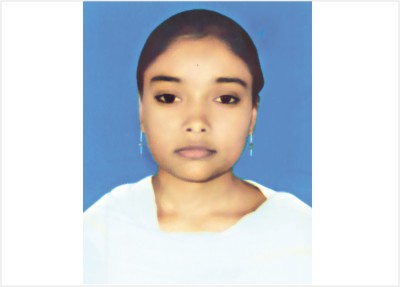 Unremitting teasing by local youths led yet another schoolgirl to kill herself at Madhya Nandipara in the city yesterday.
Umme Kulsum Elora, 14, ended her life by swallowing pesticides in their house at around 3:00pm.
She was rushed to Dhaka Medical College Hospital, where she died a little after 4:00pm.
A class eight student of Dakkhin Banasri Model High School, Elora had been bearing the torment of street harassment by Rezaul Karim, 19, and his friends for over a year.
They would disturb her over phone as well.
The girl's parents had taken the matter up with the local leaders and Rezaul's parents, but to no avail.
In a late night development, police arrested Rezaul at around 12:40am.
In primary interrogation, he claimed he had a relationship with Elora, said Sub-inspector Aslam Hossain of Khilgaon Police Station told The Daily Star at 1:20am.
Earlier in the evening, Elora's mother Halima Begum was wailing and pulling at her daughter's body at DMCH.
"I went from door to door pleading for help to save my daughter from Rezaul, but no-one did anything," she said as tears streamed down her face.
Elora was the youngest of three daughters and a son of Halima and Amin Mollah, an employee at the Accountant General's Office in Segun Bagicha.
She used to go to school in a van. But as teasing by Rezaul and his associates got intolerable, Halima had been taking her to school for last one and half months.
"On Thursday, Rezaul and five others stopped us on our way back from the school and asked why I complained to his parents," Halima said.
The mother and daughter returned home at around 12:45pm and had lunch together.
"Around three in the afternoon, Elora came to my room and lay down on the floor. She requested me to lie beside her."
As Halima got near her, she knew something terrible had happened; her little girl had taken pesticides.
Elora's sister Oni told The Daily Star that Elora could not go out of house for about a month. She started going to school again only 15 days ago after some influential locals assured the family that she would not be teased again.
Queried, she said they did not seek police help or file any complaint or general diary for fear of reprisals from Rezaul and his gang.
Meanwhile, Rezaul's aunt claimed that Rejaul and Elora had a relationship.
Talking to The Daily Star in return for anonymity, she said her nephew did never tease the girl. Rather, it was the girl's family who would torture her for relations with Rejaul.
A study by Bangladesh National Women Lawyers Association in 2008 found teasing to be a contributing factor in suicides of at least a dozen girls between January 2006 and June 2008. The number has only increased in the last two years.
On March 7, a teenage girl committed suicide by taking pesticides at Shanti Nagar village in Sherpur upazila.
The girl, Reshma Khatun, 18, was a student of Salpa Technical School. She had to contend with harassment every day on her way to school.
Her neighbour Munaf and his friend Robin were the alleged teasers.
Earlier in January, Nashfia Akand Pinky, a class nine student, took her life by hanging herself from a ceiling fan in the city's West Agargaon area. The apparent reason was harassment by 35-year-old Murad, a driver by profession.