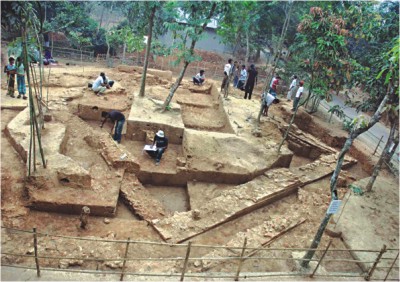 In Wari-Bateshwar of Narsingdi, archaeologists have recently excavated a 1,400-year-old Lotus Temple, the first proof of flourishing of Buddhism in the region.
The brick-built temple constructed around seventh or eighth century--as evidenced by its structure and the size and shapes of the bricks and other finds excavated at Mandirvita at Dhupirtek of Shibpur in the district--suggests existence of a Buddha Vihara there, they said.
"This is the first ever proof that Buddhism flourished and was practised in Wari-Bateshwar region of Madhupur tract," said Prof Sufi Mostafizur Rahman, who is leading the excavation team comprised of researchers from archaeological research centre Oitihya Onneswan, teachers and students of archaeology department of Jahangirnagar University.
According to a copper plaque found in 1885 at Ashrafpur, 7km from Mandirvita, King Devakhadga had donated land to four Viharas and Viharikas in the area.
"If we take the plaque into account, Dhupirtek might be one of these four sites," said Mostafizur Rahman.
The temple also indicates different phases of ancient settlement in the region dating back to 450 BC.
In 2001, examination of charcoal samples confirmed the existence of human habitation and industry in Wari-Bateshwar around 450 BC. Archaeologists think the civilisation lasted for 500 years.
The archaeology team had excavated a small portion of the temple last year. The recent excavation has unearthed the perfectly square brick-built structure.
The excavators' claim of the structure to be a Buddhist Lotus Temple was confirmed when they found an eight-petal lotus made of dressed red bricks embedded on an altar.
In Buddhism, the lotus--padma--is a very important symbol of many aspects of the path to enlightenment--complete purification of the body, speech and mind, and the blossoming of wholesome deeds in liberation.
The Buddha is often depicted as sitting on a fully blossomed lotus.
The red lotus signifies the original nature and purity of the heart.
Remnants of seven more brick-built lotuses were also found during the excavation.
A 70cm circumambulation path (pradakshinpatha) was also found around the temple.
The lotus embedded brick-built altar is above the southern wall of the temple, which was used as the main temple at an earlier time, showing that the altar was built later.
The team of archaeologists is now working to determine how long the temple survived in each phase and why it was destroyed and rebuilt.
"We want to preserve the temple as we find it, using the same materials used for its construction, showing the phases of change the temple underwent," said deputy team leader Mizanur Rahman. "Unfortunately, we are under financial constraints but our work requires more research and excavation.”