Depressing and yet snappy 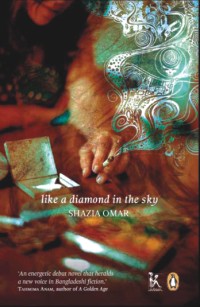 Like a Diamond in the Sky
Shazia Omar
Penguin

The debut novel by social psychologist Shazia Omar is a brave depiction of drug addiction in Bangladesh. She approaches the taboo subject with all the rigour you would expect of someone who has spent a month in a rehab centre studying dependence. She seemingly omits nothing from this gritty work of fiction.
As well as being well-researched, Omar's book succeeds because her characters are multi-dimensional and as such they provoke an emotional response. Take the central character, Deen. He is intelligent, handsome and, until relatively recently, he cared deeply about the future of Bangladesh. Before getting hooked on heroin, Deen organised fundraisers and delivered supplies to flood devastated families in villages. He even won an award for a poem he wrote about peace. But as Omar writes, "He carried the weight of the world on his shoulders… until he finally decided it was too much for him." Whilst Deen certainly has his faults, he defies the stereotype of the drug addict as the 'hopeless loser' and thus Omar invites the reader to empathise rather than judge. This is a refreshing approach.
As a 21-year-old addict, Deen's life revolves around partying, stealing money and chasing drugs with his misfit friends in Tongi. Finding the funds for regular hits pushes Deen into the deepest recesses of Dhaka's criminal underbelly. He has virtually given up on his education, having concluded that university itself is a malevolent force, "an instrument in a conspiracy to turn [students] into robots for powerful multinationals to exploit." Deen is trapped in negativity and sees no beauty whatsoever in the world around him. He detests his home city, "Deen was disgusted with Dhaka's state of disgrace. He longed to feel patriotic but instead he felt betrayed." And he believes that corruption within Bangladesh and a string of misfortunes have broken his nation beyond repair. Yet somehow Deen manages to save the bulk of his loathing for himself. He scornfully dubs his social circle "Club Khor," and he is acutely conscious of his failings, "Disappointments churned in his stomach like rotten eggs and bad music." But however much Deen wants to rid himself of his habit, he succumbs to cravings time and time again. Omar skilfully describes the grasping tentacles of addiction: the sweats, the itching skin, and the crushing inability to concentrate on anything other than finding a hit. He struggles to decide whether to give up on giving up.
Perhaps the saddest aspect of Deen's addiction is the lost friendship with his mother. Before Deen became an addict, he spent many evenings playing guitar for her, combing her hair, and discussing films and philosophy. Nowadays their relationship is punctuated by silence, long absences and "face-offs". As Omar writes, "Now only sad emptiness existed between them." Whenever his mother begs him to stop taking drugs, he responds by distancing himself from her both physically and emotionally. Deen must live with the fact that he is ruining his own life as well as hers: "She hardly went out anymore; afraid of what she might hear, unable to defend her son from gossip, weighed down by the stigma of being a junkie's mother."
Another major source of regret for Deen is the demise of his father, for which he feels partly responsible. His father had been an honest and successful businessman -- until it all came crashing down with a change of government. The family were forced to move into a small apartment and they are pushed out of every circle of friendship and influence. Deen's father sends his troubled son to rehab in Kolkata, but the Christian monks are unaware that their charges are simply shooting up without a needle. Deen returns home a bigger addict than he was before he left. On the night his father dies after a short battle with cancer, Deen is high at a party. By the time he sobers up and reaches the hospital, his father's last breaths have been exhaled. Though these events took place five years ago, Deen is haunted by recurring flashbacks and the knowledge that his mother blames him for his father's broken heart.
Life takes a turn for the better when Deen starts a relationship with fellow student Maria. He is infatuated as soon as he sets eyes on her: "Maria was a crazy diamond. He could tell from the confidence in her swagger and her defiant eyes. She wasn't weak like the other girls." Maria shares Deen's wild streak, and she is also witty and thoughtful. After the break-up of her parents' marriage, she lives independently and Deen quickly becomes a fixture in her life. But despite pretences, Deen realises that Maria is deeply vulnerable. Because she is the only thing that can equal the high Deen gets from drugs, he goes to great lengths to protect her from gnawing insecurities. However he is terrified that he will lose Maria if she discovers he has a drug problem. As the pair become closer and closer, Deen is forced to re-evaluate whether keeping the truth from his street-wise girlfriend is a wise decision.
All this sounds rather depressing; indeed, it is. But the novel's fast pace and snappy dialogue saves it from becoming too heavy for most readers to endure. But if it were, perhaps we ought to ask ourselves how tough the reality must be.

(Like a Diamond in the Sky is available at Omni, Words n' Pages, Jatra, Bittersweet Cafe and Red Shift Café).

Jessica Mudditt is an Australian intern at The Daily Star.