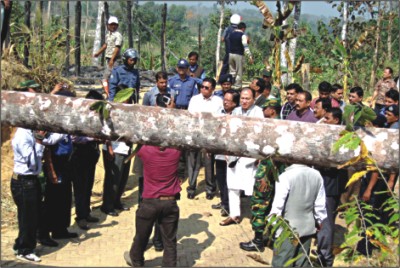 Anger continued to brew in the remote Baghaihat area over Saturday's killing of indigenous people and arson attacks on their houses, with the indigenous people holding the army responsible for the incidents.
The dislodged indigenous people also blamed Baghaichhari Upazila Nirbahi Officer SM Humayun Kabir for the incidents and attacked him yesterday when he was returning from the spot along with the state minister for CHT affairs.
They damaged Humayun's car in the presence of law enforcers, minister, Rangamati deputy commissioner and police super at Gangaram Mukh and Hazachhara.
They alleged that the army from Baghaihat zone raided their villages in commando style and opened fire at them in the presence of the UNO.
At least 1,500 indigenous people of 300 families in nine villages were displaced after Bangalee settlers allegedly burnt down the houses of indigenous people on Friday night and Saturday.
The authorities have so far confirmed the deaths of two members of the ethnic community. The bodies were sent to Khagrachhari Sadar Hospital for post mortem.
The indigenous people claimed that six persons, including Noapara Buddha Bihar monk Loko Priya Bhikkhu, are still missing. They alleged that the Bangalee settlers concealed a few dead bodies.
During a visit to different villages at Baghaihat it was found that at least 200-300 houses of indigenous people were completely burnt. Fire and black smoke were seen everywhere.
The villages that came under attacks are Gangaram Mukh, Guchchhagram, Hazachhara, Jaralchhari, Dane Baipachhara, Bame Baipachhara, Simanachhara, Chhurung Nala and Gulakmachhara.
The panic stricken indigenous people from the nine villages have taken shelter in Bongaltoli and Battala villages, some 8-10km away from the places of occurrence. At present, they are living under open sky without food as they could not save anything when they fled their homes.
A number of the injured indigenous people alleged that the settlers set fire to about 40 houses on Friday night. The next morning at about 10:00am, the settlers along with the army again went to their villages and set fire to their houses. The army cordoned their villages and fired at them, leaving two people including a female dead on the spot, they said.
Army Sergeant Rezaul, who was inured when an indigenous person chopped him with a machete, was sent to Chittagong Military Combined Hospital, sources said.
Baghaihat zone Commander Lt Col Wasim yesterday denied the allegations and said the land dispute between the indigenous people and Bangalees has been there since long.
He said he along with the UNO, the UP chairmen and leaders of Bangalee and indigenous communities tried to settle the matter, but all initiatives went in vain as both Bangalee and indigenous people did not pay heed to the solutions.
Wasim said a vested interest group might have been behind the recent incidents.
Talking to reporters yesterday, Baghaichhari UNO Humayun Kabir also refused the allegations of his involvement with the incident.
State Minister for CHT affairs Dipankar Talukder, CHT affairs Taskforce Chairman Jyotindra Lal Tripura, Rangamati and Khagrachhari Hill District Council chairmen Nikhil Kumar Chakma and Ruhity Karbari, Rangamati DC Sourendra Nath Chakrabarty and police super Masud-ul-Hassan visited the villages yesterday.
Dipankar talked to the villagers and family members of the victims and assured them of impartial judicial investigation into the incident.
He also assured both Bangalees and indigenous people of proper compensations.
Local indigenous people demanded withdrawal of the army from Baghaihat.
They told the state minister that Bangalee settlers are constructing structures on their land in some areas, which triggered the dispute over the ownership of the land.
Meanwhile, the United People's Democratic Front yesterday shifted its protest programme to block roads and waterways to February 23 because of the ongoing SSC examinations in Rangamati and Khagrachhari districts.