Where the fault lies 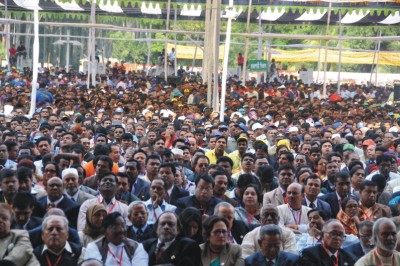 We must practice democracy, not sit through it. Photo: Meer Anis/ Drik News

WE frequently ask why Bangladeshis ignore laws and policies, intended for the common good, and do not do what they know is right. The issue is really bound up in the political culture we generated over the years and, more pertinently, in our limited concept of democracy, primarily geared towards holding elections. Let me state quite categorically: elections are a necessary condition for democracy, but not a sufficient condition for democracy.
On the one hand, democracy may be considered as a set of practical arrangements to determine "who governs," usually on the basis of some majoritarian principles. On the other hand, it also denotes a political system, which is supposedly committed to some normative ideals. These would include:
-The idea of republicanism -- signifying a government based on the consent of the governed through elected representatives who are responsive and responsible to the people,
-The concept of pluralism -- indicating a commitment to the inclusion of diverse social forces in a spirit of negotiation and respect,
-The belief in the rule of law -- suggesting the supremacy of the constitution and hence, the equality of all people in the eyes of the law,
-The commitment to individualism -- emphasising on essential freedoms to make personal and professional choices, as well as responsibility for one's actions and decisions,
-The concept of transparency -- establishing an open, honest, accessible and reliable system where the people have a right to know, and the freedom to challenge, and,
-The pursuit of social justice -- building a society based on fairness, equity, and the public good which enhances the quality of life and moral integrity of citizens.

The reason we are unable to advance the welfare of our citizens is because we are so pre-occupied with democracy as a procedure that we blithely ignore democracy as substance.
The Bangladesh "problem" is not about which party is elected through what mechanisms we create, but what political class most of our leaders come from and the behavioural/attitudinal patterns they represent. We live within a culture of impunity, cynicism, and arrogance where, ironically, the ability to circumvent the laws is claimed as a hallmark of status and power. "They" do not have to stand in line. "They" do not have to follow the rules. "They" can get away even with criminal behaviour. "They" are confident that they will never be charged with anything, and if charged, not be convicted, and if convicted, not be punished. If temporarily punished -- usually attributable to the vengefulness of the opposition party -- their political futures will not be affected. Even nearness to people with perceived power is considered a guarantee of some protections and privileges, and so we are forever scrambling to cultivate a network of patron-client relationships through which this becomes possible.
Moreover, there is often a glaring contradiction between the rhetoric employed by segments of the political classes, and the personal example they set.
For instance:
-Some will speak about the need to preserve the Bangla language and culture with seeming passion, but will send their children to English medium schools (it is not their choice of schools, but their hypocrisy that is problematic);
-Some will grimly warn us about environmental crisis, and skillfully play upon Western guilt (whose culpability, on a global scale, is undeniable), but themselves encroach on public property, pollute our air, plunder our forests, clog our rivers, and engage in reckless construction projects that is turning Dhaka into an urban dystopia;
-Some will engage in finger-wagging self righteousness about the need for moral clarity and ethical commitments, but will have no problems winking their way through the dense thicket of institutionalised graft and corruption (which incidentally, is much more than just bribery);
-Some will decry the politics of confrontation and brinkmanship, but engage in it by lowering the political discourse through mean and shabby personal attacks, employing a bullying, polarising rhetoric, and undermining the parliament (fully one-third of all parliamentary sessions have been boycotted by the opposition since 1991, as they are currently doing);
-Some will be eloquent in defence of freedom of the press, but attack journalists and file cases against them if their investigations cut awkwardly close to home;
-Some will be passionate about encouraging political constancy and ideological commitment in others, but themselves function in a system of fluid alliances and fungible loyalties, and be chameleon-like in their ability to change colour and direction depending on convenience and opportunity;
-Some will constantly warn of dark conspiracies against the people, the country, and the leaders, and turn them into a self-fulfilling prophecy;
-Some will talk about pride and patriotism, standing tall, and individual autonomy, and may even spout Frantz Fanon, Aime Cesaire or Edward Said in the process, but will diligently cultivate Western embassies and international agencies in an abject display of a lack of self-esteem, as they pursue the possibility of tangible benefits (trips abroad, invitations to parties with free alcohol, funding opportunities), and psychological security (the endorsement and blessings of foreigners being the typical means through which colonised minds seek to acquire public status and intellectual validation);
-Some will encourage us to make "sacrifices" so that they do not have to make any, and inspire us to dream of a "sonar Bangla" which many of them, obviously, already enjoy;
-Most will seek power, so that we may fear them, but not moral authority so that we may respect them.

There are, of course, courageous, outstanding and exemplary individual exceptions. Yet, generally speaking, we have been complicit in instituting a system of "crony capitalism" through the formation of a "klepto-patrimonial," rent-seeking, predatory state, which has not "failed" but has probably been "struggling" for some time, thanks to their contributions and exertions. In the hands of the same political classes, the country is destined to continue in the same direction, and what administrative changes are instituted, what reforms are envisaged, and what procedures are put in place, will probably matter little. We must ask ourselves whether changes in government mean anything more than shifting the locus of corruption from one bhavan to the other, and, apart from our relations with India, signal anything more meaningful than a switch in cultural emphases, or a shuffling of private agendas.
If we do not practice democracy in our lives, families, workplaces, political parties, attitudes towards our country and its people, and interactions with each other -- just consider how we genuflect to our superiors in dishonest and sycophantic exaggeration, and treat those below us with sneering contempt -- then democracy will only mean elections designed to satisfy our donor communities, and not a commitment to progress and freedom. The problem lies not in our laws, policies, or institutions, but alas, in us.
As T.S. Eliot had pointed out, between the intention and the act falls the shadow. In our case, that long and crippling shadow is cast by our lack of will and vision, and the perpetuation of a psychosocial environment driven by pettiness, pretension and profit, which jeopardises the very notion of the public good and social capital that democracy implies. Till we recognise the issue, and seek to change ourselves, everything else will seem like a prison exercise.

Ahrar Ahmad is a Professor of Political Science, Black Hills State University, USA. He can be reached at Ahrar.Ahmad@bhsu.edu. This is an edited excerpt from a talk at a conference at Harvard University, organised by BDI and DDBF, in October 2009.