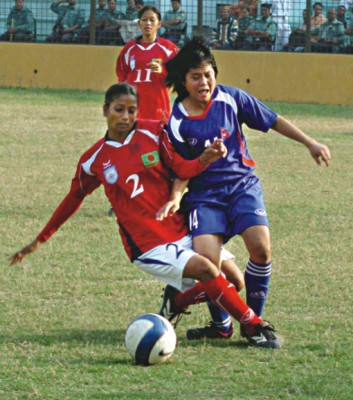 Bangladesh women football team's bid to win the gold medal of the South Asian Games suffered an early blow when they were beaten 1-0 by Nepal at Birshreshtha Mostafa Kamal Stadium yesterday.
Jamuna Gurung struck the all-important goal in the 36th minute for the visitors.
Before the Bangladesh-Nepal match, favourites India handed a thumbing 8-1 defeat on Sri Lanka, thanks to a hat trick from Moirangthem, who struck in the ninth, 56th and 59th minutes.
Apart from Moirangthem's treble, Naobi Chanu and Sasmita scored two goals each. Yumnam added the other for the winners. Pinky Bompal netted the consolation goal for Sri Lanka.
In the men's competition at the MA Aziz Stadium in Chittagong, Afghanistan upset India 1-0 with Belal Arezou scoring the only goal two minutes from half time. After conceding the lead, India put up a spirited show and yielded a lot of scoring chances but unfortunately all went in vain.
In the other match at the same venue, defending champions Pakistan suffered a lone-goal defeat to Sri Lanka though Pakistan squandered a couple of penalty shots.
S Kaiz scored the winner in the sixth minute while Pakistan failed to convert penalty shots in the 40th and 44th minutes.