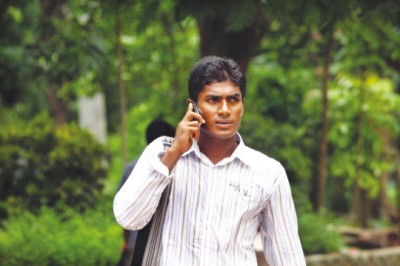 A man chats on his mobile phone. Mobile phones are now considered the key driver of remittance in Bangladesh.Photo: STAR

Bangladesh exported 50 percent less manpower in 2009. Thousands of jobless workers also returned home as their employers went broke after the economic financial crises. Yet inward remittance grew by 20 percent ($10.72 billion) in 2009. How could fewer workers send the highest-ever remittance? The stalwarts are divided.
Bangladesh Bank (BB) former Deputy Governor Khondkar Ibrahim Khaled thinks the anti-money laundering drive “has helped increase remittance through official channels.”
Mustafizur Rahman, executive director of Centre for Policy Dialogue, said: “The main cause of more remittance inflow in 2009 is the worry among expatriates about depositing money with foreign banks against the backdrop of global meltdown.”
BB Governor Atiur Rahman has, however, hit the bull's-eye: “The banking sector is much more active now. And so remittance increased. Many exchange houses and bank branches opened in different countries to send remittance.”
That is right. The central bank allowed 295 exchange houses and setting up of 840 drawing arrangements to boost remittance. It helps migrant workers send money without having bank accounts abroad.
But delivering remittance in Bangladesh remained challenging, as the workers' families do not have bank accounts either. A recent World Bank survey indicates Bangladeshi migrant workers generally remit four times a year in Tk 25,000 ($358) tranches. Speed and reliability of the delivery process is the workers' highest concern.
The central bank asked nongov-ernmental organisations to deliver remittance among the villagers. It made thousands of NGO branches the commercial banks' de facto rural outlet for remittance delivery.
“With the cooperation of NGOs, the system of remittance delivery to recipients has improved. Now we are thinking of introducing payment through mobile phones,” Rahman said, unfolding his mobile money transfer plans.
The mobile phone is already the key driver of remittance. Its coverage of nearly 100 percent of the population as well as landmass brought migrant workers, their families, the banks and the NGOs into a functional value-chain.
A worker calls his family, informing them of the amount he has sent and texts a unique code, corresponding to that transaction. He also tells them the NGO branch office from where the money can be collected.
The rural branches of the NGOs are connected with banks or exchange houses through second generation (2G) mobile internet. The beneficiary gives the NGO's “teller officer” the code of the remitted amount. The claim is verified through internet and the beneficiary gets paid.
This partnership of the banks and NGOs has outwitted the informal players. It works faster at a cheaper rate and yet it is as reliable as the baking transactions. Smart regulation prompts revolution too.
Being the second-largest foreign exchange earner, remittance contributed 10 percent to GDP in 2008. Press reports suggest most of the private banks' annual operating profits grew up to 40 percent in 2009, largely due to booming remittance.
Mobile banking will further increase inward remittance. But that is merely a fraction of the fortune that Bangladesh aspires. The migrant workers' families, truly representing the country's population, are keen to improve their quality of life.
Proponents of BBC Janala expected 25,000 subscriptions to elementary english conversation learning over mobile phone. But more than 3,00,000 people rushed to sign up “threatening to swamp the service even before its official launch,” wrote the Washington Post. It said BBC Janala “marks the first time that cell phones have been used as an educational tool on this scale.”
This phenomenon was not envisaged when the 2G mobile licenses were granted in 1996. The mobile contributed to winning of the Nobel Peace Prize in 2006. Exploding inward remittance, over 2G mobile, is one of the examples of tangible contributions.
People want universal access to education and healthcare. And they are ready to pay for it. But the government cannot deliver it overnight. Broadband over third generation (3G) mobile is ready to bridge that gap.
Few public universities have introduced online admission. Online video lectures and online examinations are among the next logical steps. Affordable broadband internet through 3G mobile will lift the rural scholars to the mainstream.
Migrating from 2G to 3G is merely a matter of granting the designated radio frequency. The telecoms regulator should immediately assign it. The barriers from international gateways should also be removed, as the banking regulator did for inward remittance. Incoming overseas calls contributes to the exchequer exactly the way inward remittance does.
Mobile broadband over 3G, with restructured international gateways, will revolutionise the economy with stunning dividends. The policymakers are aware of it. The industry is ready for it. The users are eagerly waiting. All it needs is the political will.

The writer is a strategy analyst in Ericsson South East Asia and can be reached at askhan@ieee.org.