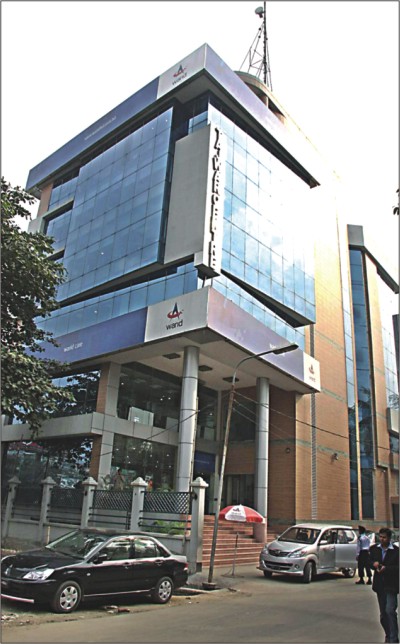 The headquarters of Warid in Dhaka. Indian telecom giant Bharti Airtel has got a go-ahead from the telecom regulator to buy a 70 percent stake in Bangladesh's fourth largest mobile operator. Photo: Amran Hossain

The telecom regulator yesterday gave a go-ahead to Bharti Airtel's $300 million initial investment proposal to buy a 70 percent stake in Warid, the fourth largest mobile company in Bangladesh.
"We have approved Bharti Airtel's plan to buy the Warid stake," BTRC Chairman Zia Ahmed told The Daily Star.
The boss of Bangladesh Telecommunication Regulatory Commission (BTRC) said the Indian telecom giant will take over a 70 percent stake in Warid by creating new shares, possibly at a nominal price.
Abu Dhabi Group has so far invested $600 million for Warid operations in Bangladesh, said an official of the operator. However, BTRC officials said half of the amount came as foreign direct investment.
"We hope Airtel investment would cross $1 billion within the next few years," Ahmed said, hinting at his talks with Sunil Bharti Mittal, chairman and group chief executive officer of Bharti Enterprises, who recently visited Dhaka.
Ahmed also ruled out the debate that BTRC will not get 5.5 percent as revenue of the total amount of a possible deal. "Whatever price Airtel is going to pay for Warid stake, as per law, 5.5 percent of the deal amount must go to BTRC."
Bharti Airtel is one of the Asia's leading providers of telecommunication services with presence in all the 22 licensed jurisdictions in India, and in Sri Lanka. It served an aggregate of 113,439,670 customers as of September 30, according to the company website.
The company also deploys, owns and manages passive infrastructure of telecom operations under its subsidiary Bharti Infratel Ltd.
Bharti Airtel at first expressed interest to invest in Bangladesh's mobile phone market in October 2008 during a meeting with BTRC officials at South Asian Telecommunication Regulators' Council in New Delhi.
With the BTRC approval, Bharti Airtel would be the first Indian telecom operator to enter Bangladesh's mobile market to compete with Bangladesh-Norway joint venture Grameenphone, Egypt-based Banglalink, Malaysia-Japan joint venture AKTEL, Bangladesh-Singapore joint venture Citycell and state-run Teletalk.
The BTRC chairman said the commission welcomes the Indian telecom giant, as Airtel has a dynamic background in telecom sector with operations in different countries.
New partnership was crucial as Abu Dhabi Group, the parent company of Waird, has been unwilling to invest for a long time. Warid officials had earlier said the company was on the lookout for a partner to raise fresh capital for investment in its next phase of operations in Bangladesh.
Warid made its Bangladesh debut as the sixth operator in May 2007 and has roped in 2.92 million subscribers until November last year.
Grameenphone is the market leader in the 50.55-million mobile market with 22.75 million customers followed by Bangalink's 12.99 million and AKTEL's 8.87 million.
Pacific Bangladesh Telecom Ltd launched the first mobile service in Bangladesh in 1993 with CDMA (code division multiple access) technology. The costly mobile service later came to the mass with the introduction of comparatively cheap GSM (global system for mobile communications) technology.
The market has become tough for bottom three operators since 2005 as top three operators in the meantime grabbed more than 90 percent market shares waging a stiff price war.
However, market insiders term the Bangladesh's six-operator mobile market as a 'crowd'.
State-run Teletalk could be the next operator to go for partnership as it is in talks to sell majority stake to a Vietnamese company.
Meanwhile, Warid officials have expressed concern fearing a big job cut after Airtel's taking over of majority stake in the operator.
"We are worried as Waird is already overstaffed," said a mid-level official at Warid Telecom, requesting anonymity.
However, they also expect that a new management might provide them with more benefits.
"We have expectations as well. The new management will give something new," the Warid official said. Presently, there are around 700 employees at Warid.
hasan@thedailystar.net