The subtle magnificence of ‘Raas’ festival 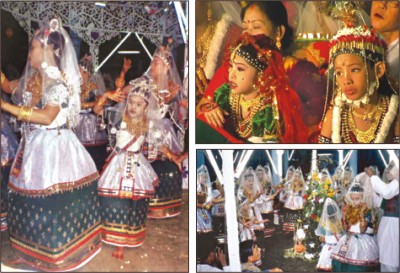 The Manipuri community from Madhabpur and Adampur, under Kamalganj upazila of Maulvibazar district, celebrated their major religious and cultural festival 'Maha Raas Leela' on November 2. Celebrations were held at Manipuri Jura Mandap in Madhabpur's Shibbazar and Adampur.
This was the 167th 'Maha Raas Leela' celebration at Shibbazar Jura Mandap. Maharaj Bhagya Chandra, the King of Manipur initiated the 'Raas Leela' celebration. Madhabpur is the first place outside Manipur, where the festival was celebrated by the 'Bishnupuria' sect of Manipuris in 1842. Since then the festival has become a regular fixture in Maulvibazar district.
'Meithei', another faction of the Manipuri community, began observing the festival at Adampur Temple from 1986 onwards. However, Manipuris have been celebrating this event on the 'Purnima tithi' (full moon) of the Bengali month Kartik every year. As Manipuris are the followers of Sri Krishna, various 'leela' of the deity stated in the religious books are enacted with songs, dances and recitation on the occasion. The highlight of the festival was that all the performances were presented in the Manipuri language.
The 'Maha Raas Leela' festival includes 'Gustha leela' (dance of the cowherd), 'Raas Nritya' (dance of Sri Radha and her friends), 'Harir Lu', 'Kirtan' and discussion on religious topics. The programme began on Monday morning and wrapped up the next morning. According to the Manipuri community, the main themes of the festival are global peace, harmony, truth and beauty.
A major draw was a fair, complete with Manipuri handicrafts and other products. Thousands of devotees and people, irrespective of caste and creed from different areas of the country, attended the festival at Madhabpur and Adampur.

Our Correspondent, Barisal
The two-day 'Raas Utshab' -- one of the biggest festivals for communities living in southern Bangladesh -- began last Sunday in Kuakata.
This tradition of over 200 years in the coastal region also signals the opening of the fishing season. Thousands of people gathered at the Kuakata coast to join the festival.
A two-day long 'Raas Mela' (fair) was arranged here. A major attraction of the event was cultural programmes sponsored by Grameen Phone as well as religious rituals.
The festival began at Kuakata beach on Sunday, with devotees arriving after the emergence of the full moon, known as 'Raas Purnima'. The event ended with the visitors taking a dip in the Bay of Bengal on Monday dawn.
The devotees believe that the bath cleanses them of all their sins. Thousands of people from far and near thronged the mela ground arranged colourfully in observance of the festival.
Since 1927, the festival has been celebrated by the local Hindu community with great enthusiasm and religious fervour. The venue: Khepupara Sree Sree Madanmohan Sheba Ashram in the municipal town.
The rituals of 'Ghat Puja', 'Bisharjan' and 'Ganga Snan' are also observed concurrently, said Bhupendranath and Kamalendu Hawladar of Madanmohan Sheba Ashram.