Politics and the female body 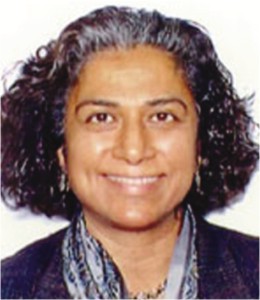 Ketu Katrak, Professor of Humanities at the University of California, Irvine (UCI), is affiliated with the Departments of English and Comparative Literature. Katrak was the Founding Chair of the Department of Asian American Studies at UCI (1996-2004). Author of Politics Of The Female Body: Postcolonial Women Writers, Wole Soyinka And Modern Tragedy: A Study Of Dramatic Theory And Practice, among other co-edited books and essays published in journals such as Modern Fiction Studies, South Asian Popular Culture, Amerasia, Ms. Katrak was guest speaker recently at a talk organized by the English Department of Independent University Bangladesh (IUB).
In the course of the talk, Ms. Katrak drew attention to certain salient features in her literary work. She articulates an innovative feminist agenda in Politics of the Female Body: Postcolonial Women Writers of the Third World by comparing the works of different authors from regions that were colonies of Britain. What seems at first glance like a review of feminist literatures of resistance is actually a dazzlingly new assessment of women's textsboth written and oral. She examines the portrayal of female subjects through tropes of "exile, including self-exile and self-censorship, outsiderness, and un-belonging to itself within indigenous patriarchy . . . strengthened by British racialized colonial practices in the regions of India, Africa, and the Caribbean" . To generate such a theory, Katrak deploys critical measures that gesture toward transnational imaginaries. Thus, the book extends a line of intellectual inquiry taken up by feminists to position resistance to patriarchy with and against historicized colonialism and postcolonialism, but it also makes important contributions by threading together key cultural practices (like dowry and bride-price, for example) to explain how the embodied subject functions according to complementary, contradictory, and competing traditions in each respective society.
Using different sociocultural registers to read female bodies imbricated in various postcolonial predicaments is a venture that has been undertaken by Kumkum Sangari and Sudesh Vaid in Recasting Women: Essays in Indian Colonial History (1990), Uma Narayan in Dislocating Cultures: Identities, Traditions, and Third World Feminisms (1997), and Lata Mani in Contentious Traditions: The Debate on Sati in Colonial India (1998), for instance. Katrak builds upon this body of scholarship to refine her own feminist schema by incorporating newer arguments made by Eve Sedgwick in Touching, Feeling: Affect, Pedagogy, Performativity (2003), Chandra Talpade Mohanty in Feminism Without Borders: Decolonizing Theory, Practicing Solidarity (2005), and Ifi Amadiume in Male Daughters, Female Husbands: Gender and Sex in African Society (1987). This list is merely a glimpse of the theoretical breadth of the book, which is balanced neatly with oral story-telling traditions, different praxis of scholar activists such as Vibhuti Patel, and with principles espoused by feminist groups such as Saheli in India and Sistren in Jamaica. This multiple-pronged inquiry enables Katrak to intervene in current, feminist analytical models and illuminate nuggets of social moves that are embedded within the narratives. One of her aims is to show how texts "forge creative alliances among writers and critics working toward a common goal of a better future for postcolonial societies". To actualize this vision of ethical engagement, the book brings into play works of writers such as Kamala Das, Anita Desai, Tsitsi Dangaremba, Bessie Head, Ama Ata Aidoo, Erna Brodber, Merle Hodge, and Buchi Emecheta.
Using novels, plays, pamphlets, and even poems (sometimes in concert and sometimes by themselves), Katrak carefully explains the effects of two of the most pernicious legacies of colonizationan English education and constructions of normative femininityto demonstrate how they serve as the base for postcolonial forms of patriarchal control. Each chapter underscores how such control becomes palpable through social attitudes and cultural morés to result in what she reads as different forms and degrees of "exile". That is, the restraints placed upon female subjectivity cause a dislocation of the self so profoundly traumatic that it leads to silence, violence, and/or self-annihilation. Katrak employs different narrative genres combined with cultural practices to illustrate this point. Out of a carefully selected slate of hegemonic control mechanisms wielded by traditions, here are just a few. She draws on Heads's autobiographical novel, A Question of Power (2002), and Lauretta Ngcobo's essay on "African Motherhood" (2000) to discuss the epistemology and injurious custom of bride-price that systemically locates girls as outsiders; she uses Anita Desai's novels and Manushi: A Journal of Women and Society from India to explain other forms of oppression exerted through bride-burning, dowry system, and exclusion of lesbian subjects. Katrak concludes by noting that protagonists in each instance create daring moves to overcome such oppression that become noticeable in a comparative study, which, in turn, reveals a growing sense of feminist agency around the world.