‘Meridian Channel i Khudey Gaanraaj’ to go on air soon

Humayun Ahmed to be a judge on the show
Cultural Correspondent 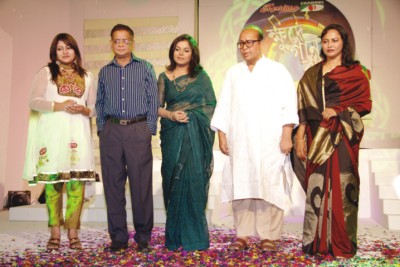 'Meridian Channel i Khudey Gaanraaj' is back on Channel i. The launching ceremony of the second season of the musical talent hunt for children was held at Winter Garden, Dhaka Sheraton Hotel yesterday.
Faridur Reza Sagor, managing director, Impress Telefilm Ltd and Channel i; Kohinur Kamal, chairperson, Meridian Foods Ltd and others were present at the event.
The first season of 'Khudey Gaanraaj' was aired in 2008 by Channel i in association with Meridian Foods Ltd. The first musical talent hunt for children and adolescents, the programme attained huge popularity among the TV audience.
Inspired by that success, this year's instalment of the show aims at giving the audience more.
The primary selection round of 'Khudey Gaanraaj 2009' is already over. Through nationwide auditions a total of 70 contestants have been selected.
This year's contest will be judged by noted literature and music enthusiast Humayun Ahmed and his wife actress-singer Shaon. The show will be hosted by actress-model Tinni.
Speaking on the occasion, Humayun Ahmed said, "I became an ardent admirer of 'Khudey Gaanraaj' when I saw the programme last year. The concept of 'a talent hunt only for children' caught my attention. It is a very good initiative. I'm elated to be a part of this show."
Shaon said, "I hope this year's programme will be as beautiful as the last season.”
'Meridian Channel i Khudey Gaanraaj 2009' will go on air soon.