Lalon: Reverberations in the soul

Jamil Mahmud, back from Kushtia 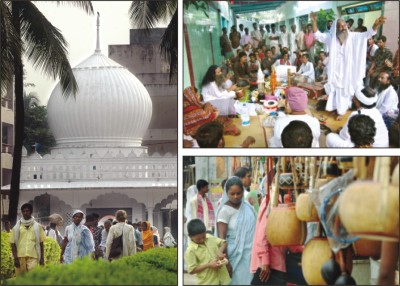 On the occasion of the bard’s 119th death anniversary, the shrine at Chheuria saw a major turnout of bauls and Lalon enthusiasts (left); Highlights of the festival were live music and a ‘mela’. Photo: Mumit M.

After 119 years of his demise, Fakir Lalon Shai's philosophy continues to have a strong hold, especially in the greater Kushtia and adjacent areas. Every year a large number of people from all corners of the country as well as from abroad visit Lalon's shrine and pay homage to the great bard.
On the occasion of Lalon's death anniversary and 'dol' utshab, special programmes were arranged in Chheuria. The programmes featured rendition of Lalon's songs and a 'mela'.
This year's programme on the occasion of Lalon's 119th death anniversary began on October 16 (the first day of the Bangla month 'Kartik'). The festival ended on October 18.
Lalon Academy -- the organisation consisting of elected people responsible for looking after Lalon's shrine and preserving his works -- organised a programme in association with the Ministry of Cultural Affairs. Banglalink was the sponsor of the programme.
The three-day programme by the academy included a 'Lalon Mela,' discussion and rendition of baul songs. Enlisted artistes of the academy and invited baul singers from across the country rendered popular and lesser-known Lalon songs on the stage.
This year, the academy honoured ten personalities including renowned Lalon researcher Professor Abul Ahsan Choudhury, Abdur Razzak and Abdul Latif Shah.
Apart from the Lalon Academy event, several programmes by different groups were also held at the adjacent areas of Lalon's shrine.
'Nabopran Andolon,' a cultural movement based on Lalon's philosophy, arranged a programme at its centre, just opposite the shrine.
Another group known as 'Mazar Sharif and Sheba Shadan Committee’ organised a three-day programme at Fakir Anwar Hossain aka Mantu Shai's residence. A group of bauls led by Humayun Shadhu rendered songs all day and night next to the shrine.
The bauls made space for themselves here and there in little groups and paid tribute to the great bard in their own ways -- through rendering songs. Not only bauls, enthusiastic urbanites were also in the crowd.
Apart from the Lalon Akhra premises, adjacent villages were also in a festive mood on the occasion. The villagers also made arrangements for performances at their yards. Music continued throughout the night. The nearby 'shamshan ghat' (cremation grounds) also came alive as bauls sat there and sang devotional songs of Lalon. All in all, the bard's songs reverberated in the locale throughout the festival.
The 'mela' (fair) was held at an open space in front of Lalon's shrine. It was the main attraction for those who were less interested in the spiritual aspects of the festival. Almost everything that is found at a village fair, was available at the mela. Locally made sweets, reputed handloom products from Kumarkhali and other areas of the district, musical instruments like 'ektara,' 'dotara,' 'dhol,' 'khol' and flute were also available at the mela.
For children there was 'nagor dola'. A street magician amused the spectators with his tricks. It was obvious that the Lalon Mela has turned into a cultural tradition of the locality.