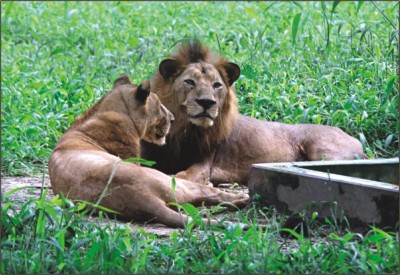 Two of the seventeen remaining lions at the Dhaka Zoo in Mirpur. A total of 20 animals died in the zoo in one year. Photo: Shafiqul Alam

A male lion of Dhaka zoo died yesterday just three days after the death of a young giraffe, showing poor health care management for the zoo animals.
With the death of lion Ringo, a total of 20 rare animals died at the zoo in a year. While visiting the zoo yesterday it was learnt that the only rhinoceros has been suffering from illness for one year while a tiger, a horse, a sambar (Nilgai) and a kudu (a deer like mammal) are also sick.
Following the death of giraffe, the curator and deputy curator of the zoo have been suspended and a probe committee has been formed to investigate the death of giraffe. The committee is supposed to submit its report by yesterday.
Eight years and three months old Ringo was found dead in its cage No C-22 in the morning. Ringo was born in Tangail zoo and brought to Dhaka zoo in 2002. The Dhaka zoo now has 17 lions in eight small cages.
The lion had been suffering from paralysis for last one year and was unable to move, said an officer who takes care of the mammals at the zoo.
“The condition of the lion was good till 7:00 pm on Wednesday but it was found dead this morning,” said the officer claiming that the lion was being provided better treatment.
The deceased lion was buried at the zoo after carrying out a post mortem examination. But whether the government has formed any probe committee regarding the death of Ringo could not be known immediately.
Earlier, a sambar deer died in the first week of May while a baboon, a wildebeest and the last member of Malayan tapir died in March. One Royal Bengal tiger, two fresh water crocodiles, one zebra and a lesser adjutant stork died in February.
Asked how many animals are now sick, Bibekanando Chowdhury who took charge of the zoo as acting curator on Tuesday said, they do not have such account. But the rhinoceros has been suffering from Pyometra, a disease of the uterus most commonly seen in female animals.
“For treatment, the rhino needs to be made totally unconscious, but the medical board does not want to do it as this is very weak,” said the curator.
An official from the Dhaka zoo said, some animals are now a burden on the zoo authorities due to shortage of manpower.
The official also said, they cannot ensure a semi-natural environment for the animals due to lack of budget and space.
“Right now we are overburdened with some animals as we have 17 pythons, 17 lions, 14 tigers and nine hippopotamus and many deer. We need lots of space if we want to ensure proper management of these animals," he said.
When asked how can the disease spread and what are the threats for the zoo animals, a top official from the zoo said, behind the zoo museum and cages of horses and giraffes, a slum has been mushrooming for last few years.
“The slum dwellers disturb and scare the animals a lot. For the safety and security of the animals the slum needs to be removed,” he said adding that the slum people keep different pet animals, which mostly spread diseases among the zoo animals.
“The slum people are living just behind the zoo wall. So, it is not safe for zoo animals' health,” said the official requesting anonymity.
The zoo is located on about 186 acres of land in Mirpur housing around 2,160 animals of 157 species.
Of them, 57 species are mammals including elephant, Royal Bengal tiger, lion, cheetah, rhinoceros, zebra, monkey, chimpanzee, and hippo. There are 61 species of bird, 11 species of reptile including snakes and crocodiles and 28 species of fish.
Every day the zoo attracts about 10,000 visitors.