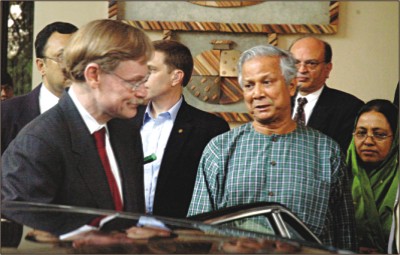 World Bank President Robert B Zoellick talks to Prof Muhammad Yunus as Yunus walks him to his car following a meeting at Grameen Bank's Headquarters in Mirpur in the capital yesterday.
Photo: STAR

Nobel laureate Prof Muhammad Yunus has asked for major reforms in the World Bank saying the multilateral development bank has not been successful in achieving its main goal of poverty alleviation.
"The world has gone through so many changes over the last few decades, but the World Bank remains static since its establishment about 60 years ago. It needs reforms and there should be a rethink of its policies," Yunus told reporters after a meeting with visiting WB President Robert Zoellick at his Grameen Bank's Headquarters in Mirpur yesterday.
"Within the present structure, World Bank country offices are working like post offices," Yunus said, adding the offices wait for directives from the headquarters and implement those.
The country offices should be autonomous in designing policies and implementation strategies on the basis of a certain nation's needs, he added.
"We can't apply the same policy in all countries. The country offices should identify problems of a certain country and then formulate policies to solve those," observed the microcredit pioneer, who won Nobel Peace Prize last year.
He said despite huge criticism from different countries, there is no change in the World Bank policies since its establishment.
The WB president declined to talk to reporters after the meeting with Yunus. Zoellick came to Dhaka on Saturday on a two-day official visit after visiting India and Pakistan.
"In reply to my suggestions, the World Bank president said it's one side of thinking, but there is also the reverse side," Yunus said revealing the WB boss' reaction to his proposal during the meet.
He said Zoellick told him they are trying for changes, but there are institutional problems.
Criticising the World Bank's existing policies for poverty alleviation, Yunus said, "They [WB] focused on growth-based development and thus invest in energy sectors, setting up ports and infrastructure.
"I've suggested involvement of the poor in their efforts for sustainable development. I told them you have forgot the people, who should be the centre of any development programme."
Alleviation of poverty is not possible without involving the people in the process, Yunus said.
"Yes, infrastructure can also help in eradicating poverty. But it will be successful only when the poor have ownership in that infrastructure," he argued.
The Grameen Bank founder also criticised the WB for not lending adequate money for microcredit activities.
Her said the WB lends $20 billion a year on average and only one percent of the amount is given for microcredit programmes.
"The World Bank should lend at least 5 percent of its total lending money for micro credit programmes."