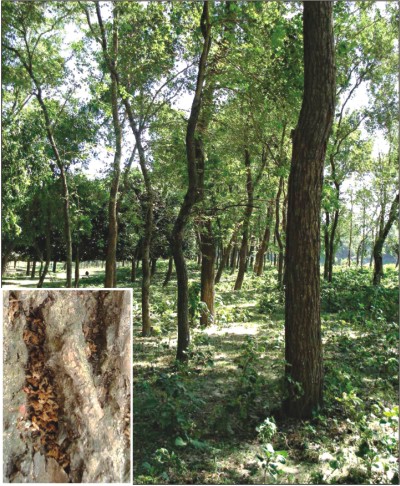 A planted Sissoo garden in Uthrail of Dinajpur, where 3,000 of the 5,000 trees have died. Inset, termites attacking a Sissoo tree soon after it had fungal infection. Photo: STAR

The very existence of Delbergia Sissoo -- one of the most widely grown trees in the country for its timber -- is under threat from fungal diseases that are causing depletion of the trees at an alarming rate.
The tree belonging to the Fabaceae family, widely popular with farmers for their commercial value, is witnessing an alarmingly high rate of mortality according to the researchers, scientists and farmers.
Sources said that Bangladesh Forest Research Institute (BDRI), after extensive research, has introduced certain remedies to tackle the new diseases but rural growers remain unaware of this leading to the death of thousands of trees in the countryside.
According to farmers and researchers the tree, widely known as the Shishoo, is used to make furniture, plywood, musical instruments, skis and boats. The timber is also used for carvings and in floorings.
Scientists and researchers say Plecoptera reflexa, a leaf defoliator, Dichmeria eridantis, a leaf roller, Stromartium barbatum, a wood borer, and Sinoxylon anale and Lyctus africanus -- two types of beetles have been reported as causing considerable damage to the trees.
The fungus, Ganoderma lucidum, causing root and butt rot is also a common ailment that hits the tree. Fusarium solani and Polyporus gilvus also cause similar diseases. Sishoo also suffers minor damage from two foliage rusts and a powdery mildew.
Sishoo has been extensively planted at every corner of the country including riverbanks and private lands, especially in Dinajpur, Rangpur, Nilphamari, Joypurhat, Rajshahi Thakurgaon, Fardipur, Barisal, Kushtia, Rajbari, Bogra and Panchagarh. Trees in almost all of these regions have been afflicted by the fungal attacks.
According to Bangladesh Forest Research Institute (BFRI) data, in 1997 the total plantation area of Delbergia sissoo in the country was about 27,790 hectares. However this figure doesn't cover farmer's fields where this species is planted for profitable economic return under the agro forestry system.
Advocate ASM Mahmudul Islam planted about 5,000 Shishoo trees on five acres of land around five years ago of which 3,000 died within the last three years. Last week he had to have 66 tress cut down to stop the spread of the fungal diseases. Another 140 trees are already infected.
He also said that some trees are being killed by termite attacks.
During visits to other Sishoo plantations, it was seen fungi diseases causing rotting of the trees' roots. Farmers also told The Daily Star that once the trees are infected, termites devour the trees.
The forest department however refutes this claim, saying termites cannot kill a full-grown tree but only feed on the dead bark of a tree. But they said that fungal attacks dry up these trees and after that termites do the rest of the damage.
Scientists and researchers have so far advised mixed plantations for Sishoo trees, extraction of dead and diseased plants to control spread of infection and controlling human interference in areas affected by the fungal diseases.
The tree grows naturally in the local climate. The Sishoo tree grows all around the globe including Bangladesh, India, Nepal, Bhutan and other neighbouring South Asian regions. The deaths have however been reported only in the subcontinent.
Forest officials of different districts agree that the situation is alarming. The forest department reported the matter to the Forest Research Institute and a team of scientists has already surveyed the affected areas.
According to them, different factors are responsible for the diseases. The depleting underground water table is one of the major reasons followed by climatic changes, said forest officials.