Army pullout from CHT kicks off 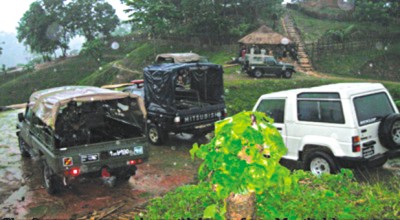 The government yesterday formally started pulling out temporary army camps from Chittagong Hill Tracts with two camps in Khagrachhari and Rangamati as per its recent decision to implement the CHT Peace Accord 1997.
The camps were located at Manikchhari of Mahalchhari upazila in Khagrachhari and at Ghagra in Rangamati.
On July 29, the government announced to withdraw one brigade troops and 35 temporary security camps from CHT region by this September.
The withdrawal of Mankchhari camp with 40 army personnel started at 11:00am and completed around 5:00pm, reports our correspondent in Khagrachhari. The camp was established in 1988 to ensure security in 23 areas.
Mahalchhari army zone's Acting Commander Maj Mamunur Rashid said all structures of the temporary camp were knocked down while the army personnel and movable stuffs of the camp were taken to the zone headquarters.
He said the land used for the camp was given back to the original owners--Shanti Bikash Chakma, Naya Ram Chakma, Premo Ranjan and Jyoti Lal Chakma.
The landowners have been given Tk 2,000 each a month as rent of the land.
However, the owners are not allowed to construct anything on the land as the army will use it until 2011 as per an agreement, he added.
Mahalchhari upazila Chairman Sona Ratan Chakma said an equal proportion of Bangalee settlers and indigenous people live in the 5 acres of land.
Upazila Nirbahi Officer Saiful Arif and the officer-in-charge of Manikchhari Police Station were present during the withdrawal activities.
Around 10 other temporary camps under Khagrachhari brigade of the army will be withdrawn in phases, said sources.
Our correspondent from Rangamati reports: Apart from the Hamid Tila army camp at Ghagra, four other temporary security camps are in the process of withdrawal. Those are Dighalchhari and Bengal Tila army camps in Barkal upazila, Dewanchar army camp at Subhalang and Rajnagar police camp at Longudu.
Army sources said nine military camps set up in the district 15-25 years ago, including Hamid Tila, will be withdrawn in phases.
The four other camps are Uttanchatra army camp at Chhotoharina, Nagar Ali Tila and Rankatya army camps at Longudu, and Guniapara army camp at Naniachar.
Troops withdrawn from the camps were sent to the Chittagong Cantonment, said sources.
The process to withdraw camps from Bandarban is yet to start.
According to the peace accord, the government is supposed to withdraw all military camps and security forces from CHT excepting the three cantonments in Bandarban, Khagrachhari and Rangamati district headquarters and those in Alikadam and Ruma upazilas of Bandarban and Dighinala of Khagrachhari, police and border security.
According to the government, 200 security camps have so far been withdrawn in phases since the accord was signed between the then Awami League government and Parbatya Chattagram Jana Sanghati Samity on December 2, 1997 to bring an end to two decades of insurgency and unrest in the hill districts.
After signing the accord, members of the Jana Sanghati Samity who had been fighting for autonomy of the CHT surrendered arms to the then AL government.
However, implementation of the accord saw little progress after the BNP-Jamaat-led alliance government assumed state power in 2001. The alliance had opposed signing of the accord.
After assuming power in January, the AL again initiated steps to implement the CHT Peace Accord to bring normalcy in the region and in May made Deputy Leader of the House Syeda Sajeda Chowdhury the chairperson of a national committee for implementation of the accord.