We need to grab half-chances against India, says Ferguson 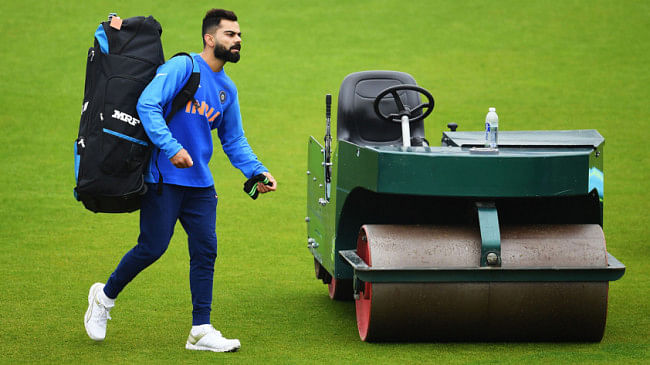 Virat Kohli will have his hands full today. Not only will the India skipper be feeling the pressure to step up with the bat against New Zealand in Shikhar Dhawan’s absence, he will also have to figure out how to lead his flawless side to a win against the only other undefeated team at the World Cup. PHOTO: AFP
REUTERS, Nottingham REUTERS, Nottingham

The right-arm paceman will be spending much of his 28th birthday trying to tame a formidable Indian batting order headlined by Virat Kohli and Rohit Sharma, the top two batsmen in ODI rankings.

“They’re world-class players, you’re not going to blow them out of the water, but if you can build up enough pressure against them and then create a half-chance, that could be the wicket and you can then build from there,” Ferguson told reporters on Tuesday.

“Obviously, they’re playing some great cricket and they’re one of the top teams in the competition but we’re definitely looking forward to the opportunity of playing them in England and we haven’t played them for a while in England.”

New Zealand captain Kane Williamson has been in good touch recently and will be looking for a big score against India today. PHOTO: NZC

India have adopted a new approach to the first powerplay overs which was evident in their clinical victory against Australia on Sunday.

Kohli’s men collected only 41 runs in the first 10 overs, without losing a wicket, but went on to plunder 116 during the last 10 en route to a commanding 352-5 which was beyond Australia’s reach.

“They showed us that they’re probably a lot more patient in a way,” Ferguson said.

“And although we’re looking to take wickets, sometimes we got a little bit expensive. I think taking wickets up front is the key to (beating) India but, if not, creating pressure and building dots balls.”

The threat of rain looms large over the contest between the tournament’s only two unbeaten teams. A record three matches have already been either abandoned or called off in the weather-hit tournament and Ferguson hoped Trent Bridge would not fall victim to another downpour.

“It’s the World Cup. We’re playing against India in the World Cup and it’s an opportunity to get two points and we don’t want to get rained-out games,” he said.

“I don’t think any players do but if that happens then so be it. We can’t control that but we’re looking forward to playing India and getting some confidence against them.”

India skipper Virat Kohli has a staggering average of 68.52 -- most by any player of either sides’ current World Cup squads -- in the 22 matches he played against New Zealand. He also scored 1302 runs against the Kiwis, which is again the most by any batsmen of the two sides’ current squad.

For New Zealand, it’s Ross Taylor who has scored 1117 runs -- most by any batsmen in current Kiwis World Cup squad -- in the 31 games he played against India.

MS Dhoni has taken 23 catches -- most by any player in the two sides’ current World Cup squad -- in the 27 games he played against New Zealand.

India’s 392 for four against New Zealand at Christchurch back in 2009 remains the highest total by any of the two sides in the 106 games they played against each other so far.

New Zealand pacer Tim Southee has scalped 26 wickets in the 18 matches he played against India. This is the highest by any bowlers among the two sides’ current World Cup squads.