‘Up to Tamim whether he will play’ 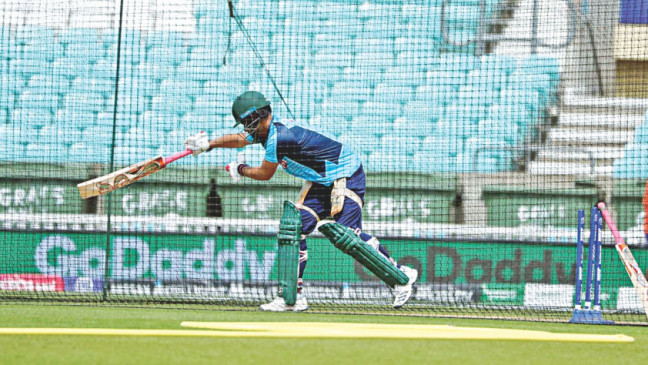 It seems that a full-strength Bangladesh will take the field tomorrow in their ICC Cricket World Cup campaign opener against South Africa at The Oval in London. It had been feared that star opener Tamim Iqbal may miss out as he abruptly left practice on Thursday after being hit by a delivery to his left forearm. However, Tamim seemed to be raring to go in practice yesterday and it was later revealed that the injury was not serious. Photo: BCB
Sakeb Subhan Sakeb Subhan

The point of interest surrounding Bangladesh’s practice on the eve of their World Cup opener against South Africa was the status of star opener Tamim Iqbal’s left forearm and whether he would be able to play tomorrow, and the early signs as well as skipper Mashrafe Bin Mortaza’s words were encouraging.

“Tamim is already batting. We will also look at [Mohammad] Saifuddin, but then it will depend in the physio’s call,” said Mashrafe at the beginning of a lengthy pre-match press conference, just as the team began their practice session.

Tamim had hurt his left forearm after being hit by a ball during net practice the previous day and immediately went to the dressing room clutching the impacted area. An X-Ray later on Friday revealed no fracture.

More than halfway through the press conference, Mashrafe seemed to change tack as to whose decision it would be regarding whether Tamim, Bangladesh’ highest run-scorer and best batsman, plays the Tigers’ opener.

If it is indeed left up to Tamim, then the signs of the opener playing are good. He practised against the sidearm in the nets while Mashrafe was speaking. Since his injury the day before was against the sidearm -- a hand-held device that increases the pace and bounce of deliveries -- that he was back practising against the very device was a sign that he was comfortable. He also took some high catches after batting practice.

Mashrafe also unintentionally let slip that he expected Tamim to play tomorrow when answering a question about Bangladesh’s chances.

“Everything depends on the day. Soumya [Sarkar] and Tamim have been playing well, but tomorrow [Sunday] they may get out in two balls,” Mashrafe said.

Mohammad Saifuddin, who had a stiff back after the warm-up match against India, was also seen bowling, as was Mustafizur Rahman, who had some calf trouble during the warm-up. It therefore seems that Bangladesh will be fielding a full-strength side for the all-important opener.