A strength that comes from within 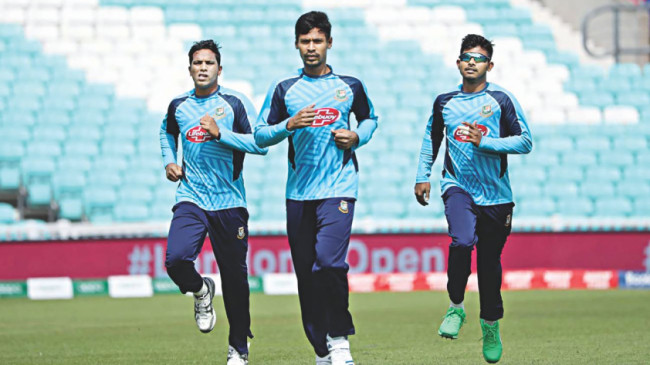 For all the talk about Bangladesh’s vaunted Big Five, the Tigers will still need their youngsters -- including the pace-bowling duo Mohammad Saifuddin (L) and Mustafizur Rahman (C) and all-rounder Mosaddek Hossain -- to step up if they are to get off to a winning start in the World Cup when they begin their campaign against South Africa today. PHOTO: BCB
Sakeb Subhan Sakeb Subhan

That Mashrafe Bin Mortaza is a special captain is known to all in Bangladesh, but yesterday, during the pre-match press conference ahead of today’s World Cup opener against South Africa, the wider world caught a glimpse of why the entire team swears by the battling cricketer and has united under him like no other.

“We don’t have to think about what’s going on outside. It’s more important to have our own belief,” said Mashrafe at the end of a marathon presser. “I’ll give you an example. When Mustafizur [Rahman] came in and bowled seriously, people thought that that bowler was something else, but when he got injured everyone doubted him.

“As a team we never doubt ourselves. We always backed Mustafizur -- we knew he is our best bowler and that he can change a game. That is more important -- what we are thinking ourselves. Because people do not think about the problems; people only think about winning or individual performance; which does not help us a lot.

“What helps us is the bond we have had over the last four years and the last month. We know how things have been going, we’ve been helping each other and we’re going the same way, we don’t want to change. It is a World Cup match, and again I say it’s another international match tomorrow. If anyone gets five wickets, if anyone gets a hundred, when we play on June 5 against New Zealand, it’s another international match. We have to look at it very simply and make sure what our family, our team is giving each other, that is more important.”

Earlier in the press conference, Mashrafe took a lot of time to ensure that his team do not go out today with the burden of expectations, joking that some back home are thinking that they have already won the World Cup or reached the semifinals.

“I think it was less last time,” said Mashrafe, responding to a question about whether there was more pressure during the 2015 World Cup, which saw Bangladesh reach their maiden quarterfinal. “I think that starting from you [the media], everyone is at a level of expectation. Maybe our players are also expecting, which is good -- expectation often brings the best out in players. I just don’t want it to create pressure. I would hope that the players stay out of these things and focus on their basic jobs.”

Of course, it can be said that Mashrafe is the one under the most pressure because, as captain, he is the one charged with making millions of dreams come true. His strength, as well as the team’s, comes from knowing that it is the ‘family’ members who have to look after themselves and, win or lose today or on June 5, the team will be okay as long as they hold on to that.