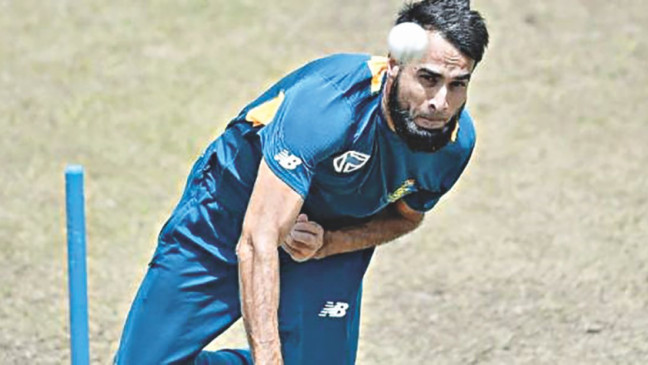 The buzz may surround South Africa’s pace battery and whether pace supremo Dale Steyn will play against Bangladesh in their World Cup encounter today, but a hidden threat may well be leg-spinner Imran Tahir, who will be playing his 100th match for the Proteas today.

Tahir surprised England in the World Cup opener on Thursday by bowling the first over of the match and was cockahoop in his inimitable fashion when he dismissed Jonny Bairstow off the second ball of the 2019 World Cup.

“It was a plan that I was working on for the last year or so, bowling with the new ball,” Tahir said in the pre-match press conference yesterday. “I think we knew that it was going to be a shock for everybody. I was very pleased with the way it came out and I got a wicket for the team, which was our plan and it worked out.”

Tahir would however not reveal whether they were thinking of continuing with the ploy today against Bangladesh, who he thought were good players of spin.

“Everyone knows they grew up in conditions where they play spin really well and they can be very dangerous on the day,” answered Tahir when asked about Bangladesh’s ability against spin. As spinners, myself and Shamsi, we are obviously very prepared whoever is selected. It’s going to be a good challenge, just like any other game but from our side we are fully prepared and hopefully we will have a good day as a team.”

South Africa are coming off a dispiriting defeat in the opening match, when they were bundled out for just 207 in 39.1 overs.

“You can take the pressure positively or negatively. If you take it positively, we’ve been beaten by a very good England team who’ve been dominating world cricket for a year or so. It’s just that they played very well on that day and I think we still restricted them to 310 [311], which was a very good effort from us. We are going to learn from our mistakes. There will be pressure but I think we will enjoy as a team and we will enjoy the challenge.”