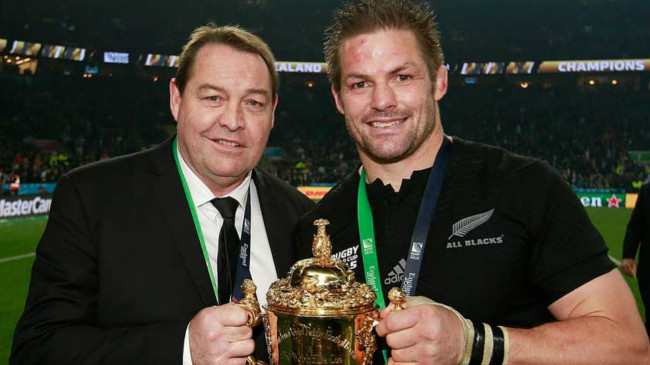 Celebrated All Blacks mentor Steve Hansen believes New Zealand's loss to England in the group stages of the Cricket World Cup will be to their advantage in Sunday's final.

The coaching maestro, who is bidding for a third rugby World Cup success with the All Blacks this year, said when teams play each other twice in a tournament it is a psychological disadvantage to win the first match.

"The advantage is held by the team that loses because I think mentally it's very hard not to subconsciously think, 'well, we've beaten these guys before', so you soften yourself a little bit, subconsciously, it's not a deliberate thing," he told Radio Sport on Saturday.

England beat New Zealand by 119 runs to make the semi-finals and then downed Australia by eight wickets to make the final.

New Zealand, who only scraped into the semis on a superior run rate than Pakistan, then beat tournament favourites India by 18 runs to reach the final

"England played Australia (in the group stages) and Australia thumped them. So, you start getting a little bit ahead of yourself and start thinking about stuff you shouldn't," Hansen said.

In the 2015 World Cup, New Zealand beat Australia in the pool stages then lost to their trans-Tasman neighbours in the final.

Hansen, an assistant coach when the All Blacks struggled to an 8-7 win over France in the 2011 World Cup final in Auckland, added that hometown pressure was also a factor which could count against England in cricket's showpiece at the famous Lords ground.

"If you're not used to that kind of pressure it can overwhelm you. So probably, advantage to New Zealand, because no one is expecting them to win in England ... it takes all the pressure off you. Are they capable of winning it? I think they are."

Hansen was also an assistant coach of the All Blacks when they started as red-hot favourites in the 2007 World Cup only to be bundled out in the quarter-finals.

He said the lesson from that shock loss was the same as it was for India captain Virat Kholi when the Black Caps beat them in the cricket semi-final.

"He made a pertinent point that 'we've played outstanding cricket in this tournament, apart from 45 minutes, and that's the reason why we're not going'," to the final.

"Immediately, if you say that to yourself, there's a different feeling. Your eyes light up, there's a smile on your face."