‘In no way are we favourites’ 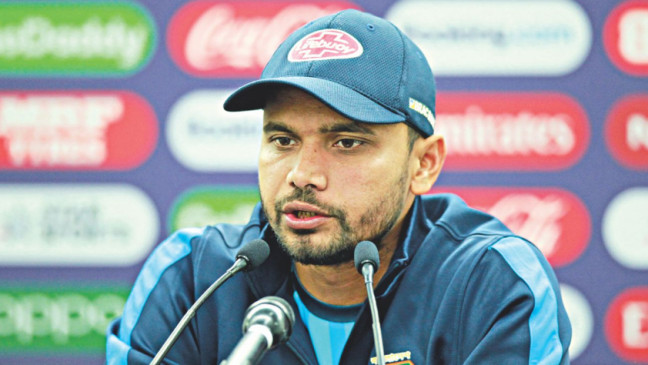 A month of preparation in similar conditions will be tested today when Bangladesh take on South Africa in their opening match of the 2019 World Cup. Over that month, Bangladesh have seen peaks and troughs -- from winning their first multi-team ODI trophy in Ireland on May 17 to being on the verge of losing star opener Tamim Iqbal to injury two days before their tournament opener. Tamim seemed fine yesterday during practice at The Oval and the Tigers seemed set for a full-strength start to a campaign that has been a source of much hope and anticipation back home.

In typical fashion, Mashrafe administered a dose of reality when speaking at the pre-match press conference yesterday. Even by his standards, he was in bullish mood about lowering expectations to a realistic standard, even resorting to sarcasm.

“Many are thinking that we have won the World Cup, others are thinking we have reached the semifinals,” he said with just a hint of a smile. “I think this is all unnecessary. In no way are we the favourites in the World Cup -- whether you are speaking of the wicket, or tomorrow’s match. Of course South Africa will play as favourites. Having said that, it is also true that we will play our best. We have prepared and we will of course want to win, and we are in no way thinking that we will lose the match.

“But talking of hype, that is created unnecessarily by many. Those who are doing cricket analysis, you will see that they have us near the back of the pack, but we are still battling in the opposite direction. We have to think about why this expectation was created surrounding us. We have reached here playing our normal cricket. For us it’s another tournament. If we were playing South Africa in a bilateral series then the match would have counted as an international; tomorrow’s [Sunday’s] match will also count as an international. That is the way our players will have to look at it.”

Having called South Africa favourites in today’s match, Mashrafe was asked whether South Africa’s opening defeat against England -- when the Proteas were bowled out for 207 in 39.1 overs -- would create any additional pressure on Bangladesh’s opponents.

“It matters where South Africa saw themselves ahead of the match against England,” Mashrafe replied. “As we all know and have seen from the opening ceremony, everyone is seeing England as favourites. In our match I am sure South Africa are thinking of their two points. We are also thinking that way. If they see the England defeat as ‘what has happened has happened, we have to win this match [against Bangladesh]’, they will take on some pressure; then we may have an in -- if they assume that they will get two points from this match, they have virtually zoned out of the game. For us, it’s not a big deal that South Africa lost against England. For us the big deal is how we are playing against South Africa and that we execute the plans we have to win the match.”

Talking of advantages, it will be the second match played on the same wicket that saw South Africa lose to England, and for once Mashrafe allowed himself to say that there is an area where Bangladesh may enjoy an advantage.

“We saw that the ball was gripping on the surface [in the opener], and if that happens that will be a positive for us,” said Mashrafe. “I believe that will keep most of our pacers in the game as well as our spinners.”