‘Four are better than two’ 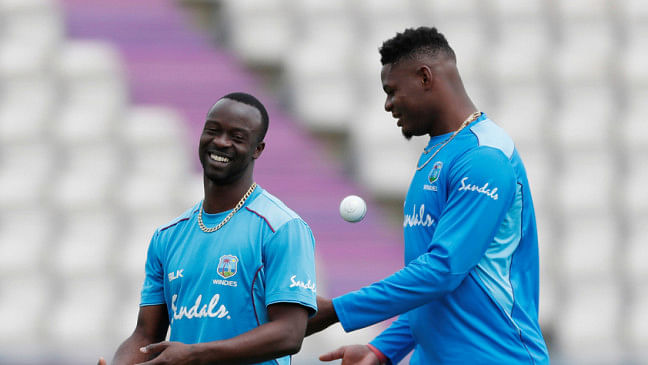 West Indies speedsters Oshane Thomas (R) and Kemar Roach looked to be in a jovial mood at the nets in Southampton yesterday ahead of their encounter with hosts England tomorrow. Photo: reuters
ICC ICC

Few things in sport are as exciting as watching a 90mph bowler and Corey Collymore insists his four West Indian speedsters can overwhelm England’s two on Friday.

The Caribbean side have long been renowned for producing destructive quicks – think Michael Holding, Curtly Ambrose and Courtney Walsh – but the well began to noticeably dry following the turn of the century.

However, in Oshane Thomas, Shannon Gabriel, Sheldon Cottrell and the recalled Andre Russell, they have four paceman all capable of topping the magical 90mph barrier.

England boast two of their own in Jofra Archer and Mark Wood, making Friday’s contest in Southampton one of the most eagerly-anticipated games of the tournament.

“We have quick bowlers too so it should be a lively game,” said bowling coach Collymore – who also used to bowl around the 90mph mark in his early career.

“We have shown what we can do with our fast bowlers, we are good enough to take wickets with the new ball and then go from there.

“I don’t think many people like the short stuff, whether it is England or the West Indies. If you find a batsman that has a weakness to it, then you go after that.

“From years gone by, that was something we prided ourselves on and now you see we have some more coming through.”