Day 2, Session 1 wins it for Kiwis 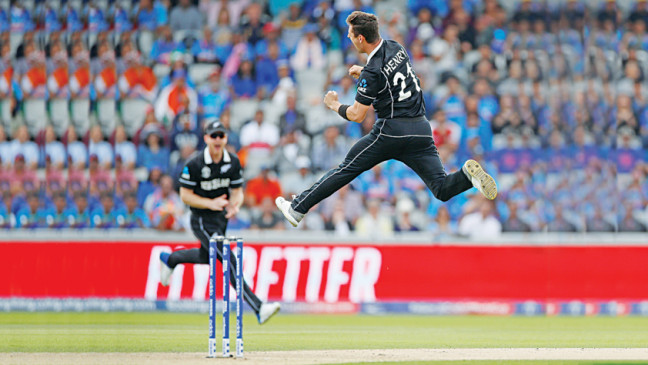 It was Matt Henry, who cornered an impeccable Indian batting line-up, removing three of the four top-order batsmen to set the tone for a magnificent win after play resumed on the reserve day at Manchester yesterday. Photo: AFP
Sakeb Subhan Sakeb Subhan

The second morning, overcast conditions, two pacers steaming in, three slips and the ball talking up a storm as batsmen just try to survive. If fans of Test cricket were missing the sport’s most primal, stripped-bare format, Old Trafford was the place to be yesterday. It was not just Trent Boult and Matt Henry’s superb opening spells that brought to mind the longest format of the game at the business end of cricket’s limited-overs showpiece -- the anticipation of resumption of play yesterday morning after the India-NewZealand semifinal spilled over into the reserve day also lent the occasion a Test-match air.

That anticipation and extra time to plan their mode of attack against India’s top order seemed to have benefitted New Zealand. Before the semifinal, India had lost just four wickets in the first 10 overs across eight matches, and opener Rohit Sharma had hit a record-breaking five tons in the edition. Having resumed the day on 211 for five with just 23 balls left in the innings and then taking the total to 239 for eight, New Zealand would have known that their chances of going to the final would hinge on early wickets. Never was the value of having a hardened Test bowler in Trent Boult more apparent, as the left-arm pacer and Matt Henry hardly put a ball in the wrong area in the first 10 overs, which produced four wickets and allowed just 24 runs.

Boult started with one slip as skipper Kane Williamson tested the waters, perhaps to see how much movement was on offer. The ball swung both ways in the first over and there were two slips in for the second. None were required as a Rohit stood rooted to the crease and poked at a late away-swinger and edged it through to the keeper.

Then walked in Virat Kohli, who lives for high-profile run chases, and Williamson brought in three slips, perhaps in memory of Kohli’s struggles in England during India’s 2014 Test tour, when early movement accounted for him numerous times. Boult unleashed a masterclass in swing bowling -- he drew a nervous drive with the first ball of the third over, angling a full ball across the Indian maestro. The next two deliveries were both moving away but Kohli negotiated better, getting closer to the first one on off stump and hitting the second one, which pitched outside leg, on the bounce to midwicket.

Kohli was perhaps expecting the inswinger, maybe he was expecting it too much, because when it came in the next ball he played all around it and was rapped on the knee roll. It was perfect execution from Boult as he got the ball to pitch on middle and off and swerved it back to strike in line. The umpire’s fingers went up, Kohli asked for a review and the ball was shown to be hitting the bails. Kohli walked off in a huff, but since the umpire’s decision proved to be correct, maybe it was because he was angry at himself for looking for a release shot when clearly, there was a game of Test cricket going on.

India were then reduced to five for three in the next over when Henry got a delivery to seam away after pitching on a fourth-stump line. KL Rahul emulated Sharma and Tom Latham took a fine catch diving in front of first slip.

Dinesh Karthik then tried to do his best impression of a Test player, scoring six off 25 balls, but was caught brilliantly at point off Henry in the last ball of the 10th over.

Having gotten Test match conditions in the morning and defending a low total, the Kiwis took a gamble and switched to Test mode. India did their best with a limited-overs fightback late in the piece, but eventually Day Two, Session One won it for New Zealand.