Archer licking his lips at prospect of bowling at Pakistan: Younis 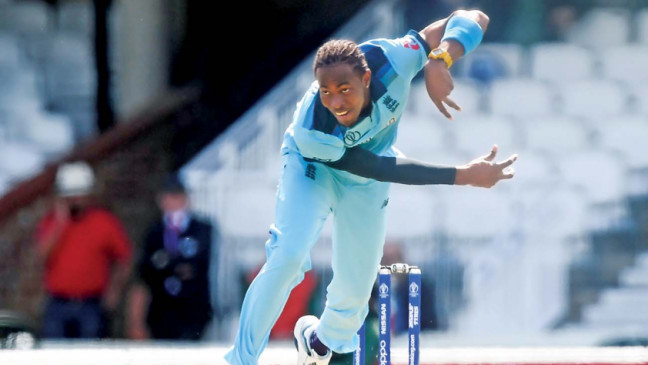 England’s Jofra Archer picked up three wickets to help bundle out Afghanistan on 160 in their World Cup warm-up match in London yesterday. England went on to win the encounter by nine wickets. PHOTO: AFP
Reuters Reuters

England quick Jofra Archer will be salivating at the prospect of bowling at Pakistan's batsmen after witnessing the South Asian side's meek surrender against the West Indies pacemen, the team's former captain and coach Waqar Younis has said.

A blistering Oshane Thomas-led pace attack swept Pakistan away for a dismal 105 at Trent Bridge on Friday as West Indies wrapped up a seven-wicket victory in under 14 overs in their World Cup opener.

Pakistan's total was their lowest World Cup score since making 74 against England at Adelaide in 1992, the year Imran Khan's team went on to lift their only 50-overs crown.

But any hopes of repeating that feat will face its sternest test as soon as Monday when Sarfaraz Ahmed's side take on tournament hosts and favourites England, the world's top-ranked side in the format.

"It will be difficult for the team to bounce back quickly enough for Monday against England – a team who are on such a high," former Pakistan captain Younis wrote in a column for the governing body International Cricket Council.

"They have probably never played better, and I think they have all the ingredients to go all the way and end their long wait for a World Cup."

Barbados-born Archer represented West Indies at youth level and was named in England's 15-man squad despite only having made his one-day international debut last month.

He picked up three key South African wickets in England's comprehensive 104-run win on Thursday, bowling with lot of pace and bounce in London.

"... you can be sure that a certain Jofra Archer will be licking his lips," said Younis, himself a tearaway fast bowler in his playing days.

"I have loved what I have seen of him so far. He is going to be the man that the world will remember when all is said and done at this World Cup.

"He has just got something about him, a bit of stardust. He is nippy and bowls with that extra bounce and most importantly, he takes wickets. I am sure he will leave a mark on this World Cup and probably on Pakistan on Monday."

Younis, however, feels it would be foolish to write off Pakistan given the format of the tournament during which all 10 sides face each other before the semi-finalists are decided.

"A lot has been said before about Pakistan's record in the past, the unpredictable nature of this side. They lost heavily in their first game in 1992 and bounced back to win that tournament after all," Younis said.

"But we cannot really dwell on what happened 27 years ago. Winning the 2019 tournament is going to take some doing this time around.

"A defeat like that damages the confidence and we need to make sure that we take our time to try and bounce back, think positive and turn the ship around."