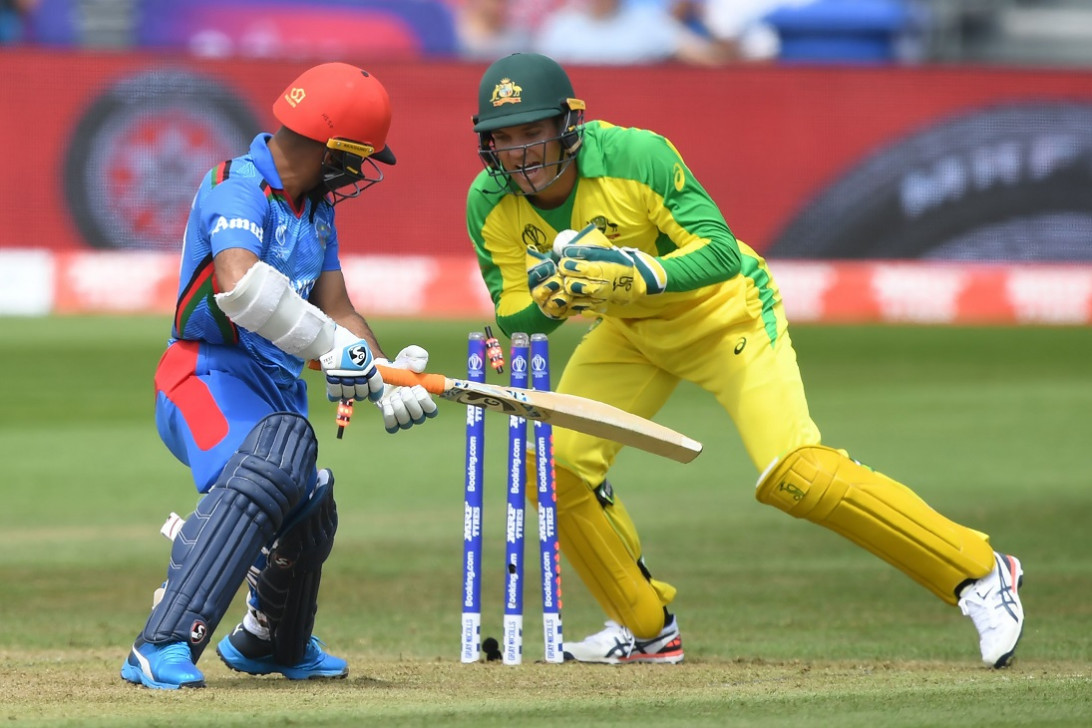 Australia registered a whopping seven-wicket victory against Afghanistan in their World Cup opener at the Country Ground in Bristol today.

After bundling Afghanistan out on a below par 207 in 38.2 overs, the two Aussie openers -- David Warner and Aaron Finch -- started off brilliantly by stringing together a 96-run opening stand. Although skipper Finch was dismissed after scoring 49-ball 66, Warner remained unbeaten on 89 to see his side through comfortably with seven wickets in hand and 91 balls to spare.

Afghanistan recovered from a disastrous start in their World Cup opener against defending champions Australia to post a brave total of 207 in Bristol on Saturday.

Gulbadin Naib, captain of the rank outsiders, took the bold decision to bat in warm conditions in the southwest of England, hoping to amass a score his spin bowlers could defend on the small ground.

But the decision backfired badly, with both openers departing for ducks as Afghanistan slipped to five for two in the second over and looked on course for a humiliation.

Mohammad Shahzad was bowled by Mitchell Starc in the opening over of the match and Hazratullah Zazai quickly followed, caught behind by wicket-keeper Alex Carey off Pat Cummins.

With their team in deep trouble, Rahmat Shah and Hashmatullah Shahidi led a fightback for the minnows, playing in only their second World Cup, putting on a gritty 51 for the third wicket.

Leg-spinner Adam Zampa broke the partnership with a beautifully flighted delivery that brought Shahidi forward and beat the batsman, with wicketkeeper Alex Carey whipping off the bails.

Steve Smith denied Shah a World Cup fifty, taking a catch at short cover off the bowling of Zampa to send him back to the pavilion for 43 off 60 balls.

In the next over, former skipper Smith dived to his left to stop a drive from Mohammad Nabi, returning the ball smartly to Carey, who whipped off the bails with the batsman stranded, leaving Afghanistan struggling at 77-5.

But Najibullah Zadran -- ably assisted by his skipper -- took the fight to his illustrious opponents, smashing 20 runs in four balls off Zampa, including successive sixes.

The big hits brought the knots of Afghan supporters to their feet and a line of flag-waving fans ran along the front of one of the stands.

Zadran brought up his 50 off 46 balls with an edge over the slips off a sharp Starc bouncer.

But their momentum was slowed the next ball when Naib top-edged a short delivery form Marcus Stoinis and Carey completed the catch.

Rashid Khan smashed 20 in a Stoinis over to lift the spirits of the Afghan fans and another driven six off Zampa brought up the 200.

But he was lbw to the next ball and the innings ended after 38.2 overs when Mujib Ur Rahman was bowled by Cummins.

As expected, Smith and opener David Warner were both included for their first full major international match since they completed year-long bans imposed after a ball-tampering scandal in South Africa.

Australia will be firm favourites to knock off the runs in the fourth match of a tournament characterised by one-sided contests so far, but Naib will be hoping leg-spin star Rashid can work his magic.

Australia endured a torrid 2018 in ODIs but appear to be peaking at the right time as they chase a sixth World Cup.

They came out on top in their series in India earlier this year before humbling Pakistan 5-0 in the United Arab Emirates. (AFP, Bristol)

Afghanistan five down as they go past hundred

Afghanistan scored 107 runs for the loss of five wickets at the end of over 27. Nazibullah Zadran is batting on 15 off 24 balls while his partner Gulbadin Naib is on 16 off 18 deliveries.

After losing two quick wickets, Hashmatullah Shahidi and Rahmat Shah started rebuiding the innings before the former was dismissed off an Adam Zampa delivery in the 14th over. After the end of 15 overs, Afghanistan scored 58 for the loss of three wickets.

Afghanistan elect to bat against Australia

Afghanistan captain Gulbadin Naib took the bold decision to bat against champions Australia in their World Cup opener at Bristol on Saturday.

Rank outsiders Afghanistan's strength lies in their spin bowling rather than batting, with the team dismissed for just 160 by tournament hosts England in a warm-up match on Monday.

Australia boast an impressive pace attack but that did not stop Gulbadin opting to bat first, with the captain explaining he wanted to give his spinners a target to defend.

"It looks quite a good, flat wicket," he said at the toss.

"We have three spinners in the side and we want to put a score on the board for them. Morale is high and hopefully we can start well."

As expected former Australia captain Steve Smith and opener David Warner were both included for their first full major international match since they completed year-long bans imposed after a ball-tampering scandal in South Africa.

Warner was passed fit to play after recovering from a sore glute.

"I'd have batted first too," said Australia captain Aaron Finch. "Hopefully we can find some movement early on and get wickets." (AFP,Bristol)