Extreme poverty in the CHT context 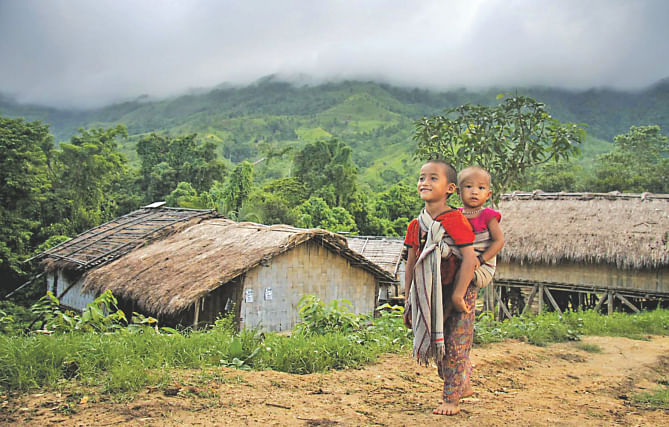 To gaze upon a case study of redistribution of wealth in the wrong direction – from the poorest to the richest - one has only to drive through the hills of Bandarban.  Hills that were once covered in a multitude of life-sustaining vegetation now bear privately-owned, commercially profitable teak trees or tobacco.  These hills were previously cultivated by nomadic hill people through jhum.  Jhum is a process that involves growing consumable vegetables (40-50 varieties) for a year and then burning all the plants on the hill and leaving it for five years to regenerate.  The variety of greens ensured a range of micro nutrients for the people, and the regeneration process allowed the land to remain fertile.  People and Mother Earth co-existed in harmony.

After independence, private settlers 'purchased' these hills and the flat stretches in between.  (I don't know who they paid but it was certainly not Mother Earth nor the indigenous people who lived there.)  These profiteers began growing teak and tobacco for quick economic returns.  Of course, no consideration was given to the social or environmental impact of this endeavor.  As it turns out, teak and tobacco do not allow for the biodiversity of multi-layered foliage that a natural forest allows.

The tribal people found fewer and fewer hills to do their jhum cultivation on and began replanting seeds on hills that had only regenerated for a year or two.  The yield was naturally lower and the soil depleted. The hill people began to suffer from under-nutrition as the variety and quantity of their food began to dwindle.  They began to retreat to more remote areas to survive.

Now a large portion of the tribal people are extremely poor.  The government allowed their land to be grabbed by private individuals and provided no adequate compensation or skills to enable the people to find alternative livelihoods.  This redistribution of wealth, from the poor to the rich, seems to be the pathetic yet popular trend in other parts of Bangladesh too.

Land grabbing is only one cause of extreme poverty in the hills.  Another major problem is the lack of public services available here.  The hospitals and schools are few and far between and difficult for many hill people to reach.  Their homes are remote and the roads are inadequate.  Even if they reach a hospital, most of them are meagerly staffed.  Many hospitals here have no doctors on a permanent basis, only ones that visit weekly.  These doctors, it turns out, often speak only Bengali, making it even more difficult for adivasis to access health services.

Those hill people who have some money to buy vegetable seeds etc and are able to speak to a community leader for permission to cultivate the few hills that still belong to the people, face several challenges. First of all, the hills they have access to are usually of poor soil quality. Secondly, little research has been done on which seeds will work best in these conditions.  These hill people know little about the proper care needed to grow crops on these hills and rarely can get hold of an agricultural extension officer to help them. Finally, the markets are controlled by syndicates of Bengalis.  They are denied easy access to these markets and they cannot negotiate for fair prices as language and cultural attitudes act as barriers.

Many of the hill people do receive government support in the form of VGF however, much of the rice meant for VGF is often sold off at subsidized rates at markets as the government finds it challenging to deliver the rice to more remote areas in the CHT.  Widows allowance is given to women who lose their husbands, but divorced women or abandoned women receive no support though most of them must support their family alone, and are in effect female headed households for their entire lives, though this is a problem across the nation, not in the hills alone.

Finally, there are no economic opportunities for the people in the hills.  There are hardly any factories, no manufacturing, only a few service related ventures and almost no jobs! I met at least five children on my short trip whose parents had worked hard to take them through class 10, but even after that, there were no jobs for them to try for.  What is the point of sending kids to school if there is nothing for them to do with their education?  Adolescent girls are expected to look after younger children in the household, till they get married, and adolescent boys are expected to work as day laborers.  So the intergenerational transfer of poverty continues.

When I asked the families who their role models were, they had none. When I asked whom they aspired to be like, they could not think of anyone.  On further probing, I discovered that the most successful people they knew were the Members (local government officials).  These poor have no social capital or networks in any other echelons of society.  Their wants are minimal and their aspirations non-existent.

As citizens of Bangladesh, we can dream of a nation where people are treated equally, where everyone has access to skills and education and a means to earn a living.  This dream is not far-fetched.  Bangladesh is a leader in poverty innovation.  We invented micro finance.  We invented ORS.  We have shown the world how to achieve high scores on social indicators, maternal mortality, family planning, women's empowerment.  Now it is time for us to lead the way again.  Our Finance Minister has promised in this year's budget speech, to eradicate extreme poverty by 2018.  Let us build a fully inclusive nation that we can be proud of!

The writer is head of advocacy at shiree. [email protected]