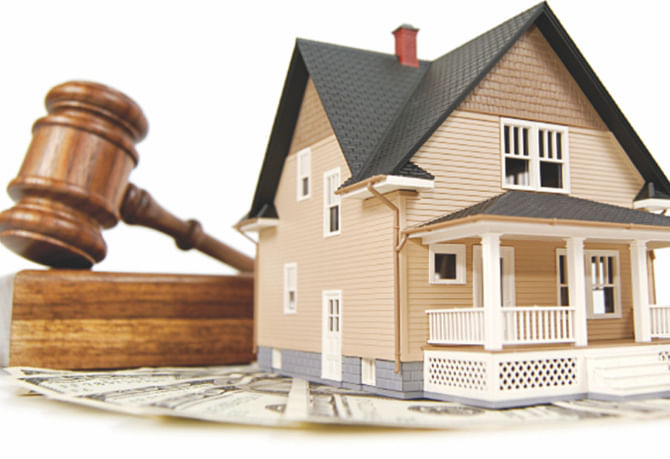 The objective of prompt recovery of loans due to banks and other financial institutions has prompted the Parliament to enact the Artha Rin Adalat Ain, 2003 (ARAA). In line with the general pattern of the provisions in the ARAA for ensuring expeditious recovery of overdue loans, Section 12 of the ARAA empowers financial institutions to sell any property which has been subjected to mortgage, lien, or pledge by the debtor as security for the loan provided that the financial institution has a legal right to sell the same, without filing any suit. Section 12(4) of the ARAA enacts that in conducting such a sale, the court would as far as practicable follow the procedure of an auction sale as provided in Sub-Sections (1), (2), and (3) of Section 33. Sub-Section (1), (2), and (3) of Section 33 provides in detail the procedure to be followed in case of selling a property through an auction in pursuance of a decree passed by the court under the ARAA.

In Zinnatul Ara (Mrs.) and Others v Government of Bangladesh & Others, [2010] 15 MLR (AD) 185, the petitioner's property was sold by an auction under Section 12 of the ARAA. She contended that as the auction purchaser did not deposit the rest of the bid money within the stipulated 10 days following the auction as required under Section 33(2) of the ARAA (as was required under the law existing then), the sale should not have been confirmed; rather the deposited security money should have been forfeited. The petitioner also deposited 7.5 million taka and applied for setting aside the auction sale upon payment of solatium to the auction purchaser.

However, the Appellate Division (AD) did not accept the petitioner's argument and rejected her petition for review of the leave to appeal petition. The AD held that as the auction sale took place under Section 12(1) of the ARAA prior to the filing of any suit, in view of the provision in Section 12(4) of the ARAA, the compliance with the requirements of Section 33 was not mandatory in this case (para 6). It should be noted that the AD also considered that the High Court Division deferred the delivery of judgment for allowing the petitioner to settle the matter with the auction purchaser which yielded no result as the purchaser showed no interest in negotiations (para 7).

Arguably, the provision of Section 12(8) of the ARAA that notwithstanding whatever else that may be contained in any other law in force, a sale taking place under Section 12 of the Act would create a valid title in favour of the purchaser and the purchaser's interest cannot be contested in any manner, may have swayed the AD to reach the ultimate conclusion in this case. However, if compliance with the provisions of Sub-Sections (1) to (3) are taken to be mandatory, then arguably the auction purchase itself can be deemed to be illegal and therefore, Section 12(8) of the ARAA would appear to be inapplicable in this case.

After all, the non obstant clause in Section 12(8) of the ARAA apparently only ousts the application of the provision of other laws and not the other provisions of the ARAA. Hence, it is difficult to see how Section 12(8) of the ARAA would override the application of its Section 33. Or, even if the purchaser's title could not be contested, proviso to Section 12(8) laying down that if there is any illegality or procedural irregularity in the sale process, the mortgagor may claim compensation from the financial institution, could have been applied.

As already pointed out, Section 12(4) does not provide that in selling a property under Section 12, Sub-Sections (1)-(3) of Section 33 must be followed completely. Nonetheless, the wordings 'as far as possible' do not imply that the Parliament has envisaged compliance with Section 33 (1)-(3) as non-mandatory; rather it would be plausible to think that the Parliament has implied that in conducting a sale under Section 12, the procedure provided for in Section 33 would be followed unless following such procedure would be impossible or impracticable. Thus, in view of the words used in Section 12(4), the aforementioned finding of the AD should have been based on a clear demarcation line between which part/s of Sub-Section (1)-(3) of Section 33 need and which one need not be followed in conducting a sale under Section 12. The legal basis for such a demarcation line should have also been thoroughly explained. However, in the perfunctory way the judgment laid down that compliance with Section 33 is not mandatory, raises more questions than it resolves.

In fact, if this finding of the AD's judgment is taken literally, it may be plausible to think that as in the case of a pre-trial sale of a property under Section 12 compliance with Section 33 is not mandatory, then one may argue that in selling a property under Section 12 of the ARAA, even the circulation of notice of an auction proceeding and giving all interested persons a chance to participate in the public bidding process for purchasing the property is not mandatory.

Thus, arguably, even a sale of a property through private negotiations between officials of the financial institution and willing purchasers would be legal, if we follow the AD's conclusion in this case. None with a reasonable mind would probably hold that this is a logical conclusion, but clearly if we follow the decision of the AD in this case, then this is what we may logically arrive at.

Indeed, there could not have been any scope for arriving at this type of far-fetched conclusion, if the AD simply limited its decision to a more textual and restrictive application of Section 12. In this case, the AD noted that the auction purchaser could not deposit the entire bid money within the statutory period fixed under Section 33, because the proceeding was postponed by an order of the court (para 6).

Thus, the AD could have held that as the breach (i.e. failure to deposit the entire bid money) occurred by orders of the court, there was no failure on the part of the auction purchaser to deposit the entire bid money within the meaning of the Section. When such an avenue existed for the AD to avail, it is submitted that the wisdom of taking a much more expansive interpretation of the provision and holding that only a part of the law enacted by the Parliament is mandatory is open to questions.