Drug smuggling on rise under aegis of AL men 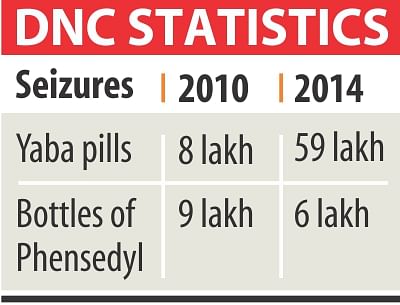 Transborder traffickers have made Bangladesh a huge market of Phensedyl and Yaba pills, manufactured in two neighbouring countries, which is insidiously destroying the youth, discussants said yesterday.

Smuggling is increasing under the aegis of the ruling party, the speakers told the discussion at the Department of Narcotics Control (DNC) in the capital's Tejgaon, and also suggested a strong political will to check the malpractice.

According to DNC statistics shared yesterday, Yaba from Myanmar tops the list of smuggled drugs while Phensedyl from India is in the second position.

On the other hand, in 2010 over nine lakh bottles of Phensedyl were seized while the number decreased to around six lakh in 2014 till November, which indicates that the demand of the contraband syrup in the country has dropped, they observed.

The smuggling issue was discussed at several director general-level conferences of Border Guard Bangladesh with Indian Border Security Force and Myanmar authorities but no visible change has been noticed yet, the speakers said.

DNC Director General Bazlur Rahman said he had strengthened monitoring in 32 districts and 120 upazilas near bordering areas and the DNC had formed 15,000 committees to raise awareness in educational institutions, starting from high schools, across the country.

According to a 2007 World Health Organization report, 0.6 to 0.8 percent of the total population of the country, or around 46 lakh people, are addicted to drugs.

However, there are only 117 beds in rehabilitation centres of the DNC and private sectors, which is insufficient given the number of drug addicts, said a DNC director.

The speakers stressed the need for modernising the DNC and increasing its manpower.

All recommendations shared by the participants will be sent to the upcoming meeting of a parliamentary sub-committee on home ministry.