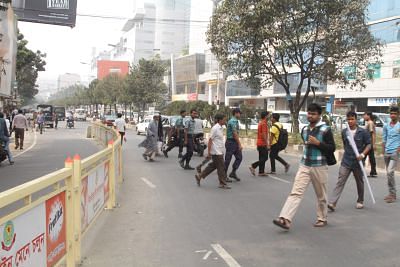 THERE would be few pedestrians in the streets of Dhaka who have not routinely or at least occasionally jaywalked and have literally put their lives at the mercy of the brakes of motorised vehicles. As a pedestrian in Dhaka, I can fully appreciate that in a country where generally the hands of the traffic police dictate the movement of traffic, in most parts of the city, pedestrians have very little choice but to indulge in this illegal activity. There is no denying that jaywalking is very dangerous. It also impedes smooth movement of vehicles and contributes to traffic jam. But the recent heavy-handed approach to punish jaywalkers seems to be based on flawed assumptions. It is also a skin-deep response to a much deeper problem.

If ensuring safety of lives is the intention of the movement to punish the jaywalkers on the spot by fining or imprisoning them, then the same concern should encourage the law enforcers to come down heavily on those motorists who flout the law by driving in the lane opposite to the legally demarcated one and on those motor cyclists for whom driving on the footpaths is the way for avoiding traffic on the road. A jaywalker's violation of law poses the biggest risk to her/his safety. On the other hand, a motorist on the wrong lane or a motor cyclist driving on the footpath not only poses a risk to her/his life but also to the lives of other motorists, motor cyclists, and pedestrians. When a jaywalker is punished for jaywalking and a car driving in the wrong lane of a road is untouchable it tells the jaywalkers that the laws of this land are only for ordinary men and the arm of the law is not long enough to catch those who can openly ignore them.

Unlike typical criminal offences, most of the traffic offences are offences not because they are patently immoral, but because any deviation from them would hinder achieving certain objectives such as maintaining safe, orderly, and efficient movement of pedestrians and vehicles on the roads. Thus, while people need not be attuned to or be reminded of the fact that an offence is an offence, traffic offences are not necessarily the same. People follow them not because their conscience tells them that violating the law is immoral, but because they feel that it would disrupt orderly movement on the roads. In other words, many traffic rules are followed because people are accustomed to following them. Consequently, when the law enforcers selectively apply this rule on some selected roads in Dhaka, it would be natural for many to fall foul of the law just by habit as almost all the foot overbridges and underpasses in Dhaka are not maintained well enough for people to use them. For physically challenged persons, people suffering from certain diseases, children, and senior citizens, it is even more difficult to use the foot overbridges. Few motorists care for zebra crossings and in many roads they are either non-existent or are difficult to find.

Instead of punishment of pedestrians, Dhaka city needs a much better developed public transport service or reducing traffic jams. A more planned transport network for Dhaka is a matter for experts and beyond the scope of this short piece. But one need not be a rocket scientist to appreciate that it is only natural that a city with a very high proportion of private transports would suffer from chronic traffic jams. To ease this, a tax for owning multiple cars or a congestion surcharge on vehicles using certain busy roads in peak hours may be a good starting point. Public transport must also be more regulated and, in particular, stopping of buses randomly must be stopped. The number of public buses needs to be increased and the quality of service has to be improved. The foot overbridges must be made easily usable. Without these measures, the punitive measures against pedestrians will not be able to address the issue of traffic jam and at best have a modest impact on greater road safety.

This whole drive against pedestrians is yet another example of arbitrary and selective application of laws on the more vulnerable section of the community. How much contribution this measure can make in ensuring road safety and speeding up traffic on the roads is uncertain, but two outcomes are more or less certain. This measure to punish the common people causes undue suffering. If the roads of Dhaka are more pedestrian-friendly, most people would not have to be forced to obey the law, they would rather do that voluntarily for the sake of their personal safety. After all, a common man in Dhaka stakes his life on the brakes of the drivers of motorised vehicles simply because, in most cases, there are no reasonable alternatives available.