Bangladesh's Hindu community has once again been brutally attacked. Following the recent general election, hundreds of Hindus including women and children all over the country were forced to flee their homes because of the fresh round of attacks on them. Some of them even swam across rivers in the shivering cold to escape the mindless cruelty inflicted on them. The Star Magazine explores the reasons behind this continuous violence against minority communities. 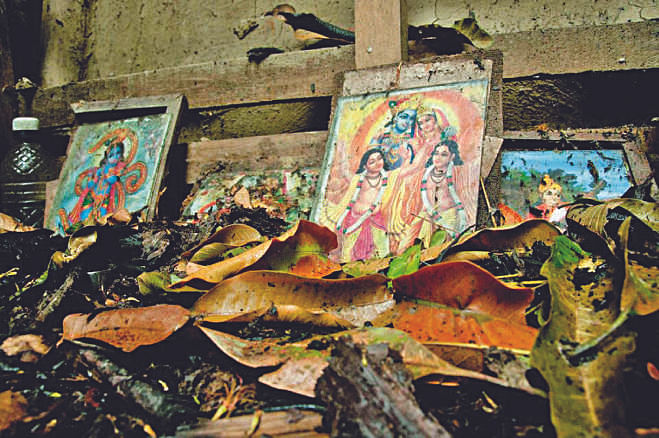 After repeated incidents of religious violence in the last two years a fresh spate of sectarian attack against minority communities was unleashed once again in the last few weeks. The terror continued for two weeks spreading over new areas of the minority dominated villages in the northern districts of Thakurgaon, Dinajpur, Rangpur, Bogra, Lalmonirhat, Gaibandha, Rajshahi, the southern district of Chittagong and western Jessore. At least a hundred temples and several thousand houses and shops of the pre-dominantly Hindu, Christian and Buddhist communities were attacked, vandalised, looted, and burnt down by the Bangladesh Nationalist Party (BNP) and Jamaat-e-Islami-led mobs. Women have been raped as part of the strategy to terrorise and humiliate these communities. People of minority communities are yet to recover from the trauma of seeing their homes burnt to the ground and their belongings looted and damaged. In many places, victims are now living under the open sky. Others have fled their homes.
Before the attack in Malopara, Abhayanagar upazila of Jessore, on January 5, members of the Jamaat-e-Islami's student body, Islami Chhatra Shibir spread a rumour that the Hindu community had killed Jamaat leader Abu Bakkar. This was the first time that such an attack had occurred in this neighbourhood. The attack on Malopara left around 100 families completely shattered. Many houses were reduced to ashes. Some 600 Hindus, including women and children, had to flee their village by swimming across the Bhairab River. Victims of the three villages believe that the attack was not an 'outburst of emotion for Bakkar' of Jamaat, rather it was an orchestrated operation.
This is not the first time that minorities have been attacked during election time. The same kind of attacks, especially on Hindu communities, were carried out after the electoral triumph of the Bangladesh National Party (BNP)-Jamaat alliance in October 2001. The obvious reason for targeting them was that these communities generally vote for the Awami League, although there are other factors at play.
It is quite clear that the Jamaat-e-Islami, after acquiring a strong foothold in the political arena, accelerated the number of religious attacks in almost all the remote hamlets of Bangladesh. On the other hand, the political use of Islam by both the major parties have made these communities even more vulnerable to such violence.
According to Md Akhtaruzzaman, professor of the department of Islamic History and Cultural Studies, Dhaka University, says this contradicts the basic teachings of Islam. Islam, says Akhtaruzzaman, represents peace and would never permit the kind of atrocities the country has witnessed in the last few weeks. He says, “Historically, we have seen atrocities for years. Every time this form of violence was unleashed against a political back drop it went into the second phase, where some perpetrators started grabbing land.”
The miscreants try to justify the atrocities as an effort to “save our faith”, Islam. A section of religious leaders exploit the religion to serve vested interests. History carries evidence of hundreds and thousands of such examples. The purpose of such acts was to attain political power or to cling to the already acquired authority.

February 8, 2012 onwards…
In 2012 and 2013, between February and November, at least 20 attacks were reported against the minority communities at Hathazari and Bashkhali in Chittagong, Kaliganj of Satkhira, Chirirbandar of Dinajpur, besides Ramu in Cox's Bazar, Sathia of Pabna, Barisal and so on.
The assault started in Hathazari in 2012, when Shibir members influenced locals to attack, loot and plunder Hindu households. Eight temples, 12 shops and a number of houses were burnt down. A resident of Nondirhat, Abu Salam also alleges that Jamaat and Shibir leaders instigated the violence in Nondirhat by influencing local people. He says, “Following the deaths of two Shibir activists during clashes with activists of the pro-government students of Chhatra League at Chittagong University (CU), Shibir was waiting for an issue to pick on. They tried to destabilise the situation in the CU area.”
As the Alia madrassah was closed at the time when the agitation surfaced, locals say that the student body of Jamaat was behind the anarchy. The Hathazari incident, moreover, has a direct link to the rise of Hefajat-e-Islam. After the violence in Hathazari, police arrested the perpetrators but with the help of Hefajat leader Ahmed Shafi, they were let out on bail. According to Hefajat-e-Islam leaders, Ahmed Shafi met with the prime minister to release them from jail. And this helped Hefajat  gain popularity among the Muslim community of Hathazari.
The Hathazari incident was the starting point of religious terrorism of Jamaat in recent years. Soon the violence covered the whole country, most importantly in the border area of Bangladesh and India. In March and April, several Hindu and a few Muslim households (who had tried to help their Hindu neighbours)  at Fatepur and Chakdaha in Satkhira, were attacked. At least 12 houses were burned down to ashes and two villages were ransacked during the two-day long vandalism in the area.
Anger mounted in the Muslim community when Drishtipat, a local Jamaat-e-Islami patronised newspaper, spread a rumour that a school play in the village had made indecent remarks about the Prophet. The local newspaper reportedly circulated complimentary copies of the paper to different houses, bazaars and mosques. By March 30, the news had spread and people started protesting in different villages. The Star has obtained earlier copies of Drishtipat from 2011, which show that the newspaper had spread similar propaganda in the past to incite violence against the religious minorities living in the area.
In the same year in September, at least 22 temples and several hundred houses and shops of the pre-dominantly Buddhist communities, as well as the Hindus were attacked, vandalised, looted and burnt down by a section of Muslims.
Blaming  Uttam Kumar Barua, a Buddhist youth, for insulting the Quran through a social networking site, religious fanatics on the night of September 29, 2012, launched attacks on a pre-dominantly Buddhist neighbourhood at Ramu in Cox's Bazar. Amid government-claimed 'tight security' in the minority groups' religious institutions, the attacks later spread to Ukhia, Teknaf and Chittagong's Patia in the following days. Law enforcers, however, could not disperse the mobs from attacking Buddhist temples and monasteries in other areas.
Last year on February 28, after the international crimes tribunal-1 sentenced the Jamaat-e-Islami leader Delwar Hossain Sayedee to death on war crime charges, Jamaat and its followers strongly protested the verdict. The verdict came with a price. Media reports stated that 100 people, including police personnel were killed and many public properties were damaged. But the mayhem of the protest did not end there. Jamaat –Shibir have allegedly unleashed their rage against Hindu minorities by wreaking havoc in about a thousand households, temples and bazaars of 15 districts in the country. More than 100 temples and 1,000 houses have come under attack since the sentencing.
In every incident rumours played a crucial role. Before torching a single hut or temple it was a rumour that instigated people to lash out against the minorities. Salimullah Khan, professor of General Education Department, ULAB elaborates, “ As Ranajit Guha puts in his 'Elementary Aspects of Peasant Insurgency in Colonial India (1983)', rumour is not an uncommon mode of transmission or propaganda in peasant rebellions.' All peasant rebellions in modern times, including anti-colonial tribal wars, employed rumours. In Bangladesh today, especially in rural areas, rumours are a kind of manifesto of peasant consciousness.”
Salimullah Khan says, Jamaat-e-Islami (founded in 1941) is a post-modern organisation, formed in the tenets of the Egyptian Muslim Brotherhood (founded in 1928). The Brotherhood itself was formed at the wake of the abolition of the institution of Caliphate in 1924 post World War I, in Turkey.
It operates on certain articles of faith common to peasant consciousness but also employs technical modes in postmodern capitalism. Coming to the nitty-gritty of it all, modern media proves no match for rumours, says Salimullah.
The Sayedee incident may be taken as a broad measure of the degree of alienation of the ruling class. Salimullah says that the fact that people are buying the rumours and reacting to them indicates that the media has failed largely to play its role.

There are allegations against Awami League leaders of playing significant roles in the vandalism and attacks. Law enforcers invariably set the perpetrators free, sometimes on bail. About three years ago, the judicial commission that probed the 2001 post-polls violence submitted a report in April 2011 to the Home Minister. However, the suggestions went totally unheeded. Mohammad Shahabuddin, chief of the three-member judicial commission, reportedly said that "no recommendation has been implemented yet. Had our recommendation been implemented the post-poll violence would not have returned."
According to the report, after the post election violence in 2001 spread, at least 355 people were killed and the BNP-Jamaat perpetrators committed 3,270 other offences against minorities between October 2001 and December 2002. To bring harmony in the community the report recommends setting up an investigation committee in each district to bring the criminals to book. It also suggests, among other recommendations that the government needs to form social groups in each community to protect the minority living under continuous threat of attacks.
The commission's report finds that during the tenure of the four-party alliance, 409 cases had been filed in connection with the post-polls violence, out of which police submitted final reports in 145 cases. The commission had identified around 22,000 persons involved in the violence. However, the findings had not been incorporated in the report.

The most disheartening reality is that the authorities failed to provide help to the minority communities when Jamaat and its student body let loose their brutal attacks. A teacher from Chapainawabganj Kansat Ranihati College expresses his disappointment: “People thought the ruling party leaders would be on the side of Hindus during the vandalism. However, despite having their party in the throne they were too afraid to come to their help or protect them.”  The minority communities are considered to be a major vote-bank for Awami League during the national polls. The attackers did not even spare the Muslims who stood by their Hindu neighbours.
The government has expressed its intention to stop these communal attacks and punish the perpetrators. If this is a sincere promise then the government should start by implementing the recommendations given in the Judicial Commissions report submitted three years ago.