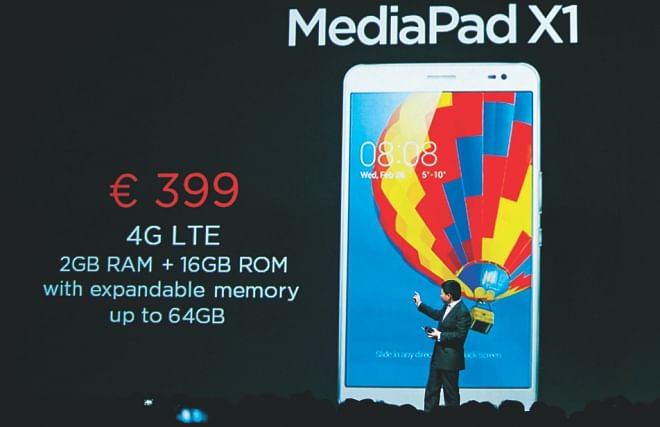 Rising Chinese smartphone maker Huawei launched Sunday a connected watch to rival Samsung's Gear 2, both unveiled on the eve of the world's biggest mobile fair in Barcelona, Spain.
Huawei, already a major force in building mobile networks and the world number three smartphone maker in 2013, showed off its TalkBand, to be sold for 99 euros ($136).
Connected by Bluetooth to a smartphone, the watch lets you receive calls and messages without removing your mobile from your pocket, as well as measuring the steps you take with a podometer and even following your sleep pattern.
"When you look around us, everything is getting connected", Huawei consumer business unit vice president Colin Giles said.
"We will launch it first in China, then in the rest of the world," he told AFP ahead of the February 24-27 World Mobile Conference.
To take a call, the user lifts the face off the watch and puts it to his or her ear, like a hands-free kit, he said.
It works only with Huawei smartphones for the moment but is to be made compatible with other brands later.
Just a few hours earlier, Samsung launched the Gear 2, after a first version won over few critics, adding new features and ditching Google's Android in favour of its own operating system.
The South Korean electronics giant revealed the new watch in a statement before unveiling on Monday its new flagship smartphone, almost certainly the Galaxy S5.
Besides an array of features including sports tracking software and a heart rate monitor, the Gear 2 marks an important and widely anticipated step towards independence from Android.