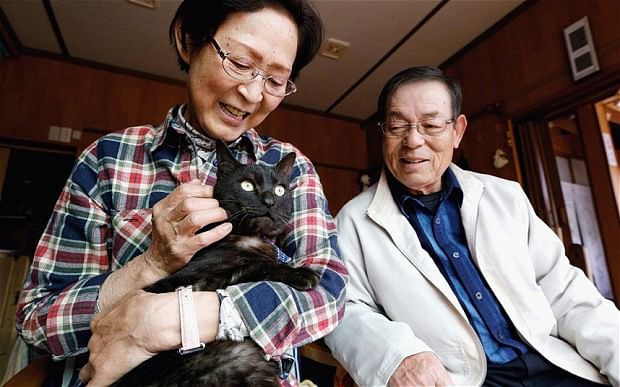 A cat that vanished three years ago during Japan’s 2011 tsunami disaster has been unexpectedly reunited with its owners.

The black cat, called Suika, was thought to have died after disappearing on March 11, 2011 – the day of the earthquake and tsunami – from his home in Ofunato, Iwate prefecture.

Kazuko and Takeo Yamagishi, his owners, spent three months searching for the cat across the city, which was badly hit by the tsunami, before abandoning any hope that he may have survived the disaster.

However, in a rare happy twist more than three years on, the cat was recently spotted in a neighbouring town and taken to the authorities before the owners were tracked down via its collar information, according to Japanese media.

Although the owners are still unsure as to where the cat has been for the past three years, their joy was evident as they were reunited at Ofunato Health Centre.

“Where have you been,” Mrs Yamagishi, 64, asked the cat during an emotional reunion, according to the Asahi Shimbun. “It’s just like a dream.”

The cat, who was the family’s pet for 12 years, had reportedly been at home alone on the day of the disaster, with the house surviving destruction from the tsunami intact but no sign of its presence when the owners returned.

It was last month, more than three years later, that a couple spotted the cat in a pine forest in Rikuzentakata, a city also ravaged by the tsunami, around 9 miles from his home town, before being taken to the health centre.

An employee noticed the faded names of the owners and a phone number on the collar, before getting in touch and arranging this month’s reunion with their beloved pet, who was apparently in good health and wearing a new bell around his neck when found.

The couple’s daughter, 36, who lives in Tokyo, reportedly burst into tears of joy when she was told over the phone of the cat’s reappearance, Mrs Yamagashi told media.