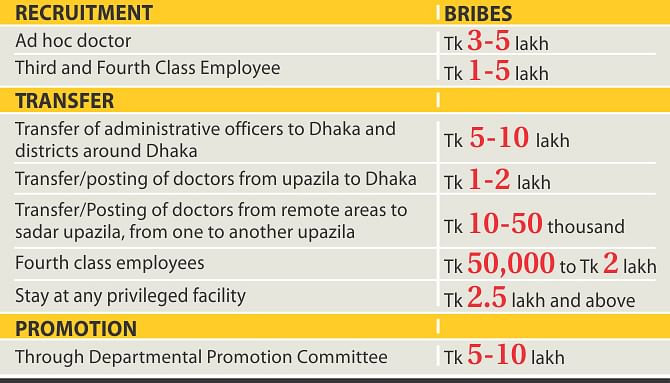 Recruitment, transfer and promotion in public health sector involve bribes up to Tk 10 lakh in each case, says a new report released by the Transparency International Bangladesh (TIB) yesterday.

Ruling party men, officials at the Directorate General of Health Services (DGHS) and civil surgeon's office and trade union leaders are mostly engaged in the corruption, the report said at a press conference at Hotel Abakash in the city.

The study also found doctors at the private sector get 30-50 percent commission from diagnostic centres for referring patients.

Many doctors at district and upazila hospitals remain off-duty during office hours, while patients are suggested to go to private diagnostic centres or chambers.

Patients at the public hospitals also have to pay bribes for beds, tests, ambulance and other services.

TIB Executive Director Dr Iftekharuzzaman said it is a matter of concern that corruption has been institutionalised in the health sector.

Because of such irregularities, people are losing confidence in healthcare in Bangladesh, he added.  Those who can afford are going abroad for treatment though the country has made great achievements in reducing birth, child and maternal death rates and increasing life expectancy.

Responding to a query, Iftekharuzzaman said the anomalies found in the study are not applicable for all doctors or officials, but these are common phenomena in the sector.

“Healthcare could have been much better had we checked the anomalies.”

The range of bribes for recruitment, transfers or promotions is Tk 10,000 to Tk 10 lakh, said Taslima Akhter, TIB Programme Manager (Research and Policy), who presented the report titled “Governance challenges in health sector and the way forward”.

“In some cases, more people are recruited than is required. Even bribe is collected just on an assurance of recruitment,” she said.

Besides, political influence and lobbying are used for transfer or remaining in a privileged facility for longer period. For promotion of teachers, experience, seniority and publications are often not considered.

“Some officials or physicians get training facilities not necessary for them.”

The government often had bought unnecessary equipment, which remained unused for lack of manpower and necessary infrastructures.

Certain officials of the National Electro-Medical Equipment Maintenance Workshop get commission and provide no objection certificates with the connivance of Central Medical Stores Depot (CMSD) officials to issue work orders to private companies only for making money.

Often, contractors in league with the authorities concerned get their payments for repairing hospital buildings without ensuring quality of the work.

Suppliers of patient diet at hospitals are selected on the basis of political influence, said Taslima Akhter.

“Though the lowest bidder gets the supply order, prices of some items remain higher than the market prices. Some items are also not supplied as per bidding documents,” she said.

Hospitals in many cases are supplied with medicine not as per the demand or that with shorter lifetime. Authorities sometimes buy drugs at higher prices from non-listed companies.

The watchdog found that laws are often not enforced effectively.

For example, the National Health Policy-2011 speaks of keeping diagnosis costs in the private sector at tolerable level, but no initiative has been taken yet, Taslima Akhter said.

Laws have limitations regarding action against the doctors for their negligence, but amendments to overcome those have not been made yet.

As per the law, the DGHS is supposed to regularly inspect the private clinics, but it is not done, Taslima said.

Doctors sometimes use designations not recognised by the regulatory authority -- Bangladesh Medical and Dental Council -- only to cheat the patients.

Talking to reporters, Iftekharuzzaman said the gradual decline of budget for the sector is also a matter of concern. Health budget in 2008-09 was 6.58 percent of national budget but has declined to 4.60 percent now.

Besides, he said, there are shortage of physicians and health workers.

The TIB executive director urged the government to increase the health budget, strengthen monitoring of private hospitals and clinics and enhance facilities to ensure that doctors continue to work in the rural areas.

In response to queries by reporters after a programme at the ICDDR,B, he however said he would look into the TIB report and will take action if it has anything specific against any person involved in corruption.

Referring to the recent recruitment of some 6,000 doctors, Nasim said there was no scope for lobbying or corruption.

People are getting free healthcare in all the public hospitals and community clinics where there is no room for bribery, the health minister said.