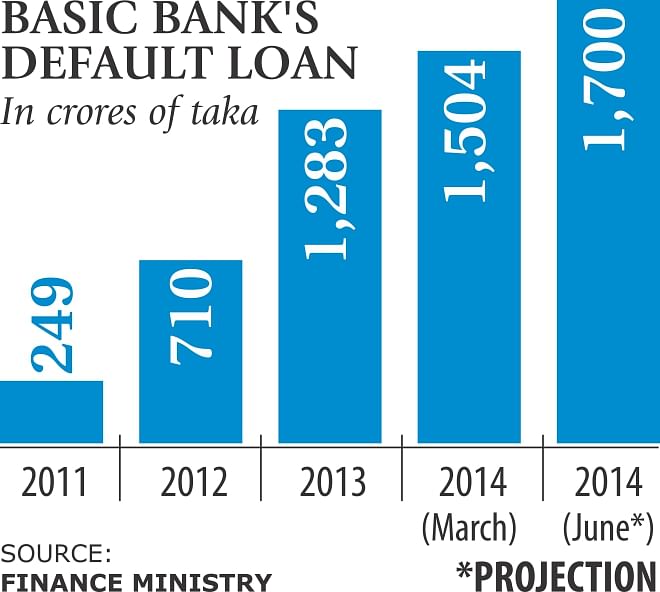 BASIC Bank's default loans continue to escalate in the face of irregularities, despite Bangladesh Bank's efforts to keep it in check.
By the end of June, it is forecast to hit Tk 1,700 crore, up 13 percent from March 30, according to a finance ministry report placed in parliament on Thursday.
The figure is 13.45 percent of the state-run scheduled bank's total outstanding loans, and a central bank official tipped the actual figures to be much higher as the bank showed a huge amount of bad loans to be non-classified.
The report also found that the bank's financial condition is worsening by the day, with its capital eroding at an alarming rate.
The minimum capital requirement as per BB's stipulations is 10 percent against the risk-weighted assets, but BASIC's stood at only 4.5 percent at the end of March.
One of the best-run banks till 2009, BASIC has been mired in financial irregularities in recent years, with the bank counting losses—of Tk 43.2 crore—for the first time last year.
Central bank investigations unearthed irregularities involving loans worth around Tk 4,500 crore in the last three years, and on May 29 it advised the government to dissolve the bank's board as the governing body was found to be complicit in the irregularities.
While the BB on May 24 removed the bank's managing director Kazi Faqurul Islam for his failure to check the irregularities, the government is yet to take any action against the main accused, Sheikh Abdul Hye Bacchu, the bank's chairman.
Asked about the lack of action against the chairman of the board, Finance Minister AMA Muhith yesterday said the prime minister's approval is required for it.
However, he said punitive actions are on the way against the bank's board considering the central bank's recommendation.
Asked if the loans given out through irregularities could be recovered, he said: “I don't know.”
The banking regulator also suspended loan activities at three of BASIC'S branches—Dilkusha, Shantinagar and Gulshan—where most of the irregularities took place last year and the year before.