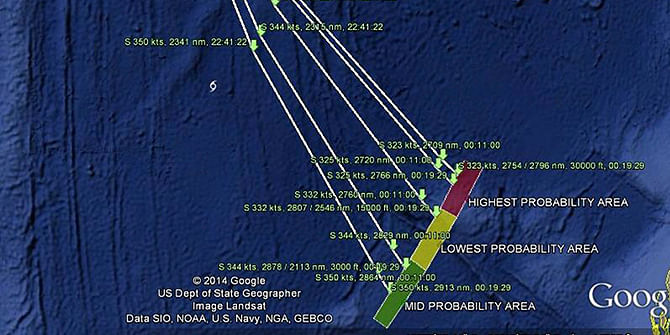 A map shows the possible path of Malaysia Airlines flight MH370 as released to Reuters by the Malaysian Transport Ministry on Thursday. Malaysian authorities released on Thursday preliminary report into the disappearance of MH370 with recordings from the cockpit and control tower as well as possible flight paths.

Bangladesh has sent two navy ships to investigate a claim by an Australian company that it may have found possible wreckage of the missing Malaysia Airlines flight MH370 in the Bay of Bengal though Malaysian authorities earlier dismissed the possibility as far-fetched one.

Two Bangladesh Navy ships -- a frigate and a survey vessel -- were sent to the spot 190 kilometres off the coast on April 29, a senior navy official told The Daily Star.

"As soon as they get there, they will search and verify the information," Quoting Commodore Rashed Ali, director of Bangladesh navy intelligence, reports CNN.

The Adelaide-based firm GeoResonance had said that electromagnetic fields captured by airborne multispectral images some 190 kilometers off the coast of Bangladesh in the Bay of Bengal showed evidence of aluminum, titanium, copper and other elements that could have been part of the Boeing 777-200ER, which disappeared from radar on March 8 while en route from Kuala Lumpur to Beijing.

The chief coordinator of the Joint Agency Coordination Centre, retired Chief Air Marshal Angus Houston, however had been sceptical of the claim made by GeoResonance.

He had told Sky News International that the search area in the Indian Ocean had been set based on pings believed to have emanated from one or both of the plane's voice and data recorders.

"The advice from the experts is that's probably where the aircraft lost power and, somewhere close to that, it probably entered the water."

Houston's views are supported by CNN aviation expert Miles O'Brien who said that GeoResonance's claims were not supported by experts.

"My blood is boiling," he told CNN's "New Day" programme. "I've talked to the leading experts in satellite imaging capability at NASA, and they know of no technology that is capable of doing this. I am just horrified that a company would use this event to gain attention like this."

He called on company officials to offer "a full explanation" for their assertion, which he said appeared to be based on "magic box" technology.

O'Brien also told CNN that sending investigators to the Bay of Bengal would draw away from the limited resources that are focused in the current search in the southern Indian Ocean when the plane is believed to have crashed.

But that won't stop the search teams from going, he said. "I think they have to," he said. "It's a public relations thing now."

David Gallo, director of special projects at the Woods Hole Oceanographic Institution, also expressed scepticism over the claim by GeoResonance. "It's so revolutionary, and I don't know anyone that knows of this kind of technology," he told CNN. "And I know most of the people in this business."

Aviation experts, however, said investigators are obligated to check out GeoResonance's claim.

"The investigators are going to be hard-pressed to blow this off," Mary Schiavo, a former inspector general for the US Department of Transportation, told CNN. "I think, at this point, because of the lack of results where they've been searching for six weeks, they're almost stuck. They have to go look."

GeoResonance had said on Tuesday that its findings should be investigated.

"The company is not declaring this is MH370, however it should be investigated," the company had said.

The company's director, David Pope, had said that he had not wanted to go public, but did so only after his information was disregarded.

"We're a large group of scientists, and we were being ignored, and we thought we had a moral obligation to get our findings to the authorities," he had told CNN's "New Day" on Tuesday.

GeoResonance's technology was created to search for nuclear, biological and chemical weaponry under the ocean's surface or beneath the earth in bunkers, Pope had said.

The company's news release had said that its search technology was reliable. "In the past, it had been successfully applied to locate submersed structures, ships, munitions and aircraft," it had said.

"In some instances objects that were buried under layers of silt could not be identified by other means."

The company began its search four days after the plane went missing and sent officials initial findings on March 31, Pope had told CNN. It followed up with a full report on April 15, which it would not make public.

"We only send our report to government authorities as it contains the exact coordinates of what we believe to be the wreckage of an aircraft," Pope had said in an email to CNN.

By going public with their conclusion, if not their data, the company had said it hoped that it would spur officials to take its claim seriously.

Pope had also said that Malaysian authorities had contacted GeoResonance on Tuesday and were "very interested, very excited" about the findings.

Inmarsat, the company whose satellite had the last known contact with MH370, remains "very confident" in its analysis that the plane ended up in the southern Indian Ocean, a source close to the MH370 investigation told CNN.

The Inmarsat analysis is "based on testable physics and mathematics," the source said, and has been reviewed by US, British and Malaysian authorities as well as an independent satellite company.

A preliminary report on the plane, submitted last week to the International Civil Aviation Organisation, is expected to be released to the public today, acting Transport Minister Datuk Seri Hishammuddin Hussein had said yesterday.

"The report will be very basic, I assume – most initial, preliminary reports are," Schiavo told CNN. "Just the facts, basic things."

But she predicted it would also lay out what is not known, as well as a blueprint for the path ahead and, as such, could prove helpful to family members of those who were aboard.

Hishammuddin is set to fly to Australia next week to discuss the next phase in the search for flight MH370 and the costs involved.

He had said yesterday that thus far, Australian authorities have not spoken about the economic cost of the search.

"As it will involve deep-sea searching, it is important to discuss the issue of cost," Hishammuddin had told reporters.

"The discussions will involve all the relevant stakeholders and revolve around issues such as where the search will be conducted and what assets will be deployed.

"Another important issue is who is going to supply the assets which will be necessary to carry out the search," Hishammuddin had said.

On Monday, Australian Prime Minister Tony Abbott had said that the next phase in the search for MH370 would be a more intense underwater search.

The underwater operation will involve the use of private contractors and could take months, costing an estimated US$56 million (RM184 million).

Thus far, Bluefin-21, a submersible on contract to the United States Navy, has not been able to locate any sign of the aircraft on the ocean floor.

Further technology, including a number of underwater vehicles, both private and public, could be pressed into service to join the search. - May 1, 2014.